Nasty knotweed now not quite so happy in Nairn town centre?

For several years now the Gurn has highlighted the spread of Japanese Knotweed and other invasive species on the River Nairn, and particularly the riverside walks in the town centre, as this batch of search results will testify. In 2014 Knotweed’s notorious capabilities have gone big time, you don’t have to search online now to find out information about its destructive properties (both to the local ecology and house prices); it’s gone mainstream appearing on television, radio and regularly in the dead tree press. For example, the Sunday Times magazine had knotweed on its cover last weekend; “The plant that ate Britain” and “Matt Rudd on the unstoppable rise of the Japanese Knotweed. Inside six pages on the subject of Fallopia japonica (as the Romans might have said but certainly the botanists that came after them). The Sunday Times magazine states inside to crank the fear levels up a notch: “It’s eating our gardens, destroying our houses and ruining our lives. Can anything free us from the insidious grip of Japanese knotweed?” Terrifying stuff but the impact it can have on housing prices and your ability to sell is definitely real as cases in the Sunday Times illustrate, recently there were other cases of buying/selling knotweed induced misery on Radio 4.

This observer would think that it hasn’t ruined anybody’s life in Nairn yet but along the riverside it is fairly abundant in patches and in one or two places it could make the leap into gardens in a short number of years. Any potential liability there for Highland Council or the Common Good perhaps? One quality of this plant makes it the perfect alien species to colonise the riparian area of a spate river however and that is its ability to propagate itself. You only need one fragment of stem or root to be brought down and deposited by a spate or some sort of human or animal activity and you will very quickly have a new infestation.

Can it be beaten? It will take several years of application with herbicide to do the job or there are more expensive methods of filtering and removing soil but theoretically it can be done. River Community Council are on the second year of an eradication programme on the east bank of the river between the A96 and sewage bridges. Here a couple of pictures that seem to indicate that the battle so far is going River CC’s way – it could be a couple of years yet though before Tommy Hogg and his fellow councillors will be popping the champagne corks but the signs so far are good. 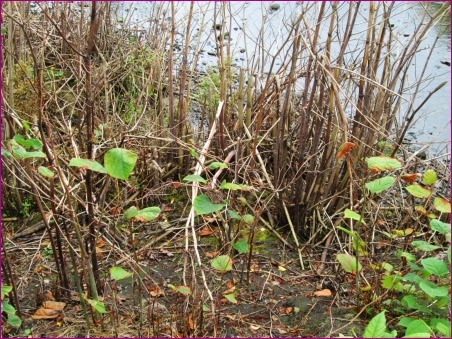 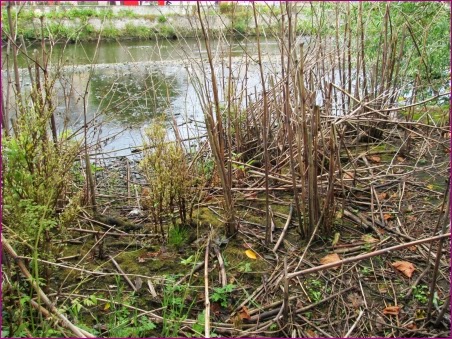 The Gurn understands too that a mysterious individual who one of our regular readers has named as “The Knotweed Avenger” has been going out sporadically during the summer months so far this year and spraying some patches in the town area of the River Nairn. See image below. 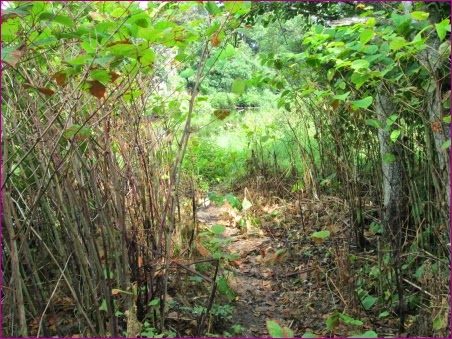 The results don’t look quite as good as the year 2 efforts in the River CC project area but the Japanese Knotweed certainly looks unhappy in places. The Gurn understands that the “Avenger” is a qualified volunteer working under the direction of Findhorn, Nairn and Lossie Fisheries Trust. It’s a start but more needs to be done on the lower reaches of the River Nairn that is certain.
Posted by Graisg at 12:31 PM