"Scotland Yet" film to be screened in the Little Theatre by "Aye, Have a Dream" group

The "Aye have a dream" group tell the Gurn: 'We are holding a free event in Nairn on Saturday 19th July at the Little Theatre. The film "Scotland Yet" http://scotlandyet.com/ the first feature length  film in Scotland financed solely through crowd funded donations is being  shown. Doors open 2pm, programme starts 2.15pm with our drop in 'Aye,  Have a Dream' event 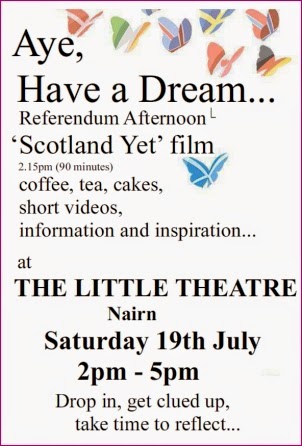 of coffee, tea, cakes, display running concurrently  with an opportunity to chat or view other short films after Scotland Yet  which runs for 90 minutes.

Eschewing many of the staples of referendum coverage: such as  confrontations between political ‘big guns’ and the bear pit of party  politics, the film Scotland Yet looks instead at a surge in grassroots  political activity and brings together a vast array of voices from  across contemporary Scotland. Director Jack Foster said of the documentary:

‘This is a must see film for undecided voters. If you’re confused about  the referendum and want to think about the big issues without feeling  pressured to vote one way or the other, get yourself along to a screening.’ " Trailer for the film here.

Are you Yes, No or undecided and planning something connected with the referendum? Let the Gurn know - Not organising anything but got something to say? Send us your thoughts for publication if you wish.
Posted by Graisg at 10:40 PM