The sun shines in Inverness on Liz's BBC Bias demo

There were some heavy downpours in Inverness this afternoon but the weather improved as Nairn Councillor Liz MacDonald today led a demonstration in Inverness that walked up from the Town House to the BBC Highland premises on Culduthel Road. Image below and more images here. 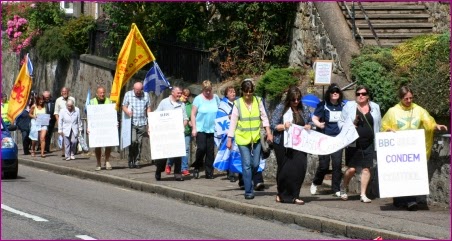 Liz's protest coincided with a larger one in Glasgow and she told those present:

"Thank you to everyone who came here today, we’re here to support the protest in Glasgow although we can’t be there we agree with their sentiments. This protest is not about local or Scottish Services but rather about the way Scotland is being treated by London based HQ and Westminster decisions, In 2012 and 2013, 35 job losses at BBC Scotland was a devastating blow for output in news and current affairs across Scotland and we lost many great reporters. Output from BBC Highlands was drastically affected, losing a significant element of reporting staff at Inverness.

With dictatorial control exerted by London we will never get fair reporting. London BBC is all about retaining the Union and the power base in London and by retaining membership of CBI they endorse the no campaign.

According to BBC’s own figures Licence fee money collected in Scotland after costs is £287million but the BBC only spend £205million in Scotland leaving us £82million short changed. We are in the middle of the biggest decision many of us will ever make and the publicly funded BBC is only paying the Scottish Independence referendum lip service whilst touting UK Government propaganda."

Independent MSP Jean Urquhart was also at Liz's demonstration and made a brief speech - see video below:


Are you YES, NO or undecided? Have a Nairn connection and have something to say then let us know - views from both sides or none most welcome - contact info@gurnurn.com
Posted by Graisg at 5:36 PM

Is their a source for the cost figure? Let's assume the march was for fair reporting in which case a breakdown would be good. If the 205 only includes Scotland specific bbc programmes/content then it seems a very good deal to me. I'd also argue that, whilst more local news would be nice for the entire uk, we have to be realistic on costs.

Irrespective of any perceived bias I'm sure that Scotland will vote with their heads for the outcome that they wish for. Perhaps the issue is that those, on either side, who complain about bias are really just frustrated that the other side has the better arguments and do not want them to be aired.

Wings...Hardly proof of bias. The main thrust of the research shows time spent on either side's point being weighted. It gives some pro independence examples to prove it's point but does not research whether the time spent on each side of the debate was justified. Take a no nuclear subs statement. I'd expect more debate on the negative impacts of the idea than positive. Unfortunately the article doesn't go into that, and if it did not everyone would agree.

Wings.....It is not evidence of bias for the BBC to give equal weight to those parties who oppose independence as it does to the Government party that proposes it. Which opposition parties would you wish to be silenced?

I'd like to have seen/heard the BBC give equal time to those who support independence and those who do not, but this has not happened.

Which ever way you'll vote this cannot be seen as fair?

That's very true. I've even seen Ukip being given air time to talk about Scottish independence even though they don't have one Westminster MP.

Still, I suppose it's good to hear them as the next Westminster government is likely to be a Tory/Ukip coalition. No voters must be looking forward to this

Well done to those people who protested against the BBC on Sunday, democracy is not dead yet!

Well worth reading the alternative press The Dirty Dozen - The case against BBC Scotland: Part 1

Not so much paranoia as desperation methinks.

A Yes vote is a positive one said...

You're absolutely right. We've seen the No campaign try to swamp the electorate with fear and lies and now they're really desperate as they've no ammunition left to try and stop people from voting Yes, not even the BBC bias will stop us having an independent Scotland

Lets all just wait and see !