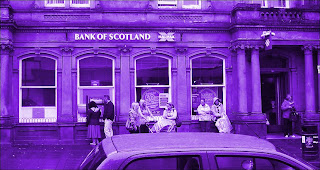 With the buyout of HBOS will we see the BOS branch on our high street put under wraps and closed? There didn't seem to be too many Nairnites struggling out of the Bank of Scotland's doors with their co-op carrier bags stuffed with £33K this morning, but I wonder as to how many peeved customers will carry their accounts up the street to the Royal Bank of Scotland? It is after all our last remaining Scottish bank and judging my Mr Salmon's comments of yesterday he would fully support such action by HBOS account holders? Mind you it is early in the day and who knows as to who will own what banks by the end of it? Maybe there will be much stuffing of notes under the mattress for safe keeping, certainly cash withdrawals will make matters worse for the banks - never liked your bank? draw some cash out today, Gurnites will show them.
Or maybe the Lloyds/TSB further up the High Street will get the dunt instead, AyeRight? Just like our beloved Somerfield store one of those two branches could soon find themselves on the disposal list?
Posted by Graisg at 12:41 PM