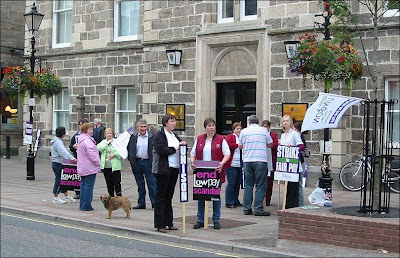 Once again local council workers take to the streets to prove their point. Passing motorists were showing their support this morning by honking their car horns. (picture will enlarge)
Posted by Graisg at 8:47 AM

Who isn't suffering these days? If I worked for the council and had a publicly funded pension to look forward to then I think I would keep my head down and not draw attention to myself amongst the less fortunate who would be paying for that pension out of their council tax.

Surely all they will get from today's action will be the lose of another day's pay for today's strike. Some of us don't even get the luxury of unions negotiating pay rises! Some companies just put through an increase and some don't even bother to give an increase on a yearly basis at all. The only ones suffering from this as far as I can make out are the local children being denied a days education.

Why don't they just sack the lot,and give their jobs to people who would be grateful for a job.Don't know when they are well off.

The Editor of the Gurn is not without sympathy for some of the more lower ranks of Highland Council but it has to be said the organisation they work for is hardly universally popular in Nairn and they may lose public sympathy because of that.
Anon (11.16) talks about pensions, well does anyone know if a council can go bust? Banks still can it seems so maybe Highland Council, already short of 19 million pounds this year, might not be around to pay any pensions in the future.

Please temper your comments if you wish to comment anonymously - these folk are part of our community and are only exercising their democratic right.

Anon's argument that (s)he's not in a union so no-one else should be tolerated to use the method to stand up for themselves appears to me to be viewing the situation through the wrong end of the telescope.
Surely (s)he should be looking at the Council workers and thinking how (s)he could get organised to get collective representation in these situations.
I recall the same arguments to sack-em-all, being used against the Grangemouth strikers.
To me, it's a very strange and demoralising phenomenon how far to the right the attitude of some of society's less advantaged people have become.