GM is back on the political menu!

Iright has a gurn for us:
A few folk involved with the Gurn took part in the anti GM protests at Munlochy some seven years ago. It seems that the mighty GM companies want the UK to consider GM food again. I am not sure as to how to say NO to our government but it seems they are sort of supporting a toe in the water approach towards the public. The promises are high from the pro GM lobby - cheaper food, feed the world etc. Reality is that these companies just want to make money period. There is enough food to feed the world, just not enough money for folk to buy it. This is making the issue seem simplistic but I won't labour you with too many details here. Farming Today on Radio 4 is looking at the issue of GM this week. Local anti GM hero Donnie McLeod is featured in this podcast:
You can also make your feelings known and vote on this BBC page. 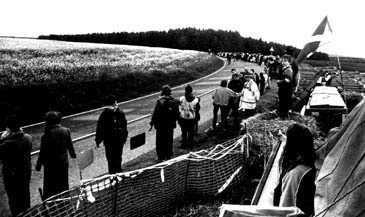 Thanks Iright, well said. We could make a start in feeding the world with the stuff that supermarkets chuck out every day couldn't we? 'Thalla 's cac!' Labour and Gordon Brown, we don't want GM! - Even the three convenors at Highland Council don't want GM, wake up and represent the people not the GM companies!

On another unrelated food matter the Gurn has heard from a totally unreliable source that the first person through the doors at the New Lidl was from Nairn. Could well be true. The Gurn wouldn't be surprised if as much Nairn money gets spent in Forres supermarkets as it does in the building that claims to perform that function here.

Email ThisBlogThis!Share to TwitterShare to FacebookShare to Pinterest
Labels: GM

I've really never understood the fuss about GM food; consuming it certainly would not bother me (I'm sure I have consumed it often, just as most people in the UK do regularly - it would be completely impossible to certify that all the animal feed which comes from the US in the form of maize is GM-free, as these methods are widely, probably even universally, used there - same goes for Brazil, where a lot of animal-feed products originate, too).

Incidentally, my family connections in the Highlands are all from Munlochy, so I know a lot of the people involved either directly or indirectly. This is sound-bite politics of the worst kind.

Incidentally, my family connections in the Highlands are all from Munlochy, so I know a lot of the people involved either directly or indirectly. This is sound-bite politics of the worst kind.