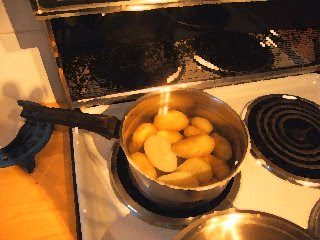 The recent round of energy price hikes has led to the AyeRight team looking at cooking. As reported in the Gurn the AyeRight folks have an electric energy consumption meter with which they are now open to energy consultancy.Team cooking member Chefayeright discovered this wheeze whilst going up the street for his messages to complete a meal. "I needed some tatties for this dish and decided to prepare and start cooking ma tatties before I went out. Much to my joy having brought them to the boil, switched off the heat, and left the lid on the pan on they were perfectly cooked for when I returned with ma messages". Chef found that by bringing his tatties to the boil they then cooked (slowly) in the heated water and were ready in 15-20 minutes. I grew up on the notion that food for Friday needed to be put on the gas by Tuesday at the latest to get a 'good boilin' so this is indeed a cooking revelation, no doubt other foods might have the same cooking principle? Pressure cooker cooks (Try saying that fast - OK... it stays the same) might also offer Gurnites cooking gas saver tips?
Posted by Graisg at 8:05 PM