Thankfully, graffiti is unusual in Nairn but yesterday a slogan appeared on the railway bridge close to the Grantown road junction of the A96. It reads "Shell get out of the Arctic". There are high-profile efforts ongoing by environmental organisations to draw attention to Shell's activities in the Arctic and according to some media observers this all seems to be having a considerable effect.  This graffiti  however doesn't seem to have inspired anyone to think about that issue if reaction on Nairn's social media groups is anything to go by: people seem to be outraged and concerned with the aesthetic effect and are calling the graffiti vandalism.  One of our regular readers sent us the picture below 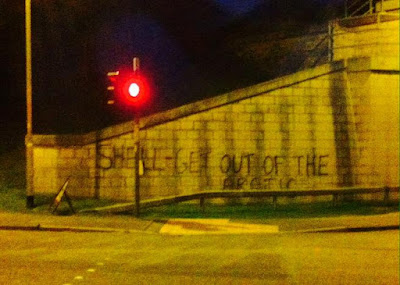