Help get the County Cat pitch invader home - do you know anyone missing their animal? 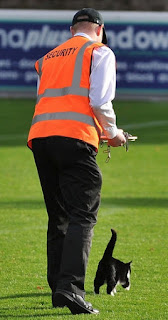 of the home side’s 5-1 over Selkirk eventually disappeared over into the hospital area after a very confident stroll on the park. On Saturday Mashy Young took the second picture below and posted it on social networks in the hope of alerting its owner(s). The cat had been seen in the Cawdor Road area all day before going in to take in the Scottish Cup game.

On Sunday afternoon a similar cat was seen, this time in the middle of the High Street, amusing itself. Some County fans have taken it into safe keeping for the time being. Advice from the Cats Protection League is to release the cat in one of the areas it was seen. The animal’s temporary hosts (they’ve called it Conor for the time being) would like to make a serious effort to find the owners before doing that however and realistically Cawdor Road and the High Street are not sensible places to let a wandering cat loose.

It emerged later that another black and white cat had been in the Cranloch area on Friday. See the third picture below taken by a resident in that area. Looking at all the photo's we are fairly certain that this is the same cat.
Do you recognise this cat? He is black and white and approx 7 months old. The way it has been moving about it could really come from anywhere in town though. Let’s see if we can get Conor sorted.

Pictures below from Sunday, Saturday and Friday. Please contact info@gurnnurn.com if you have any information or leave your contact details in a comment (they will not be published).