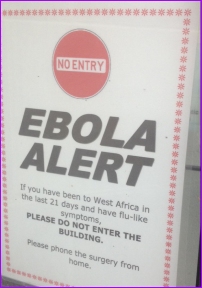 was still on the door at the hospital. Looks like we are still at alert status locally then.

Thanks to Donald Matheson for the video below from the recent comedy show in the Playhouse starring Cameron Sinclair and his assistants.

Taking you a stage further into the comedy culture that sometimes breaks out in Nairn venues is another video here featuring Russell Hicks and a man from a place that doesn’t exist.


Not many County fans went through to a dreich Mosset Park on Wednesday night. On similar evenings this observer would suggest that x2, x3 or even x4 of the faithful would have made the effort. Forres numbers seemed down too - the magic has gone from the North Cup?

One County fan labelled it “entertainment vaule 0 but the right team won". Congratulations to Connor Gethins for getting his 150th goal for the club however. County will face Wick Academy in the North of Scotland Cup final on Saturday the 10th of October at a venue to be arranged. Meanwhile next up tomorrow is the visit of Clachnacuddin FC on league business – they will bring through their usual contingent for a day in the seaside town and it will probably all be its normal passionate affair. The following Saturday the Selkirk-Nairn special will leave the borders town bring the Borders fans north for the second Scottish Cup encounter at Station park between these two sides in recent years.


And here are pictures from Wednesday night’s County victory from Kenny MacLeod. Bumped into Kenny tonight too down the beach, did anyone else catch the marvellous sunset tonight?

Congratulations to Jackos FC who have retained the AJG Parcels Welfare League Shield after a 7-0 win over Nairn... http://t.co/BFgOJJO8iz

Re Ebola
Couldn't wonder why your reader didn't just ask someone to take poster down? Although similar posters are still up in School airport.
More fun "gurning" than in "helping"?
Nairn's hard pressed NHS staff deserve praise not ridicule.