News from Murd - the Firhall Bridge - a puddle too far - plus one other matter. 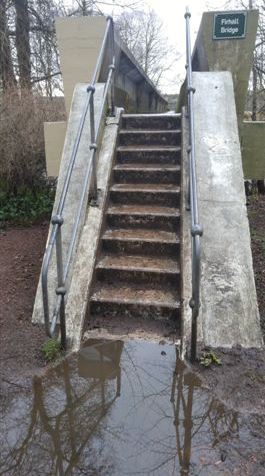 progressing with the issue of the large puddle at the bottom of the Firhall steps bridge. At the March meeting Murd had asked if anything could be done to fill in the very incovenient puddle (picture right). Stephen Fuller had been to see the puddle and took up the issue on Murd's behalf. Nothing had been done however and the problem seemed to be that an official was not answering Stephen's e-mails. Gone are the days when somebody could be dispatched to sort a wee problem like that the next morning?

Murd is also campaigning for something to be done about what he considers to be two dangerous trees close to the riverside footpath on the Househill side of the River as you approach the Firhall Bridge.

Never mind that.. The real controversy is over a new fence at the harbour!!!

JUST THINK! GET THE RAMP IN PLACE! HEY HO! NEW WATERSLIDE! YOU COULD ALWAYS USE YOUR '10'SIGN TO SHOW THE DEPTH AT THE DEEP END ! SORTED,NEW NAIRN ATTRACTION!!!!!

We'll deal with the Firhall puddle, head over to face book if you are into fences :-)
https://www.facebook.com/groups/nairnourtownourview/

If ALL the dangerous trees around the river were to be "dealt with" there would be little left.These are Elder Alders not Elder Odders. Its oor river too.

Leave the trees alone.
That seams to be the opinion of the H.C. but Being Anonymous we want know?.
One thing is for sure Its some one who dose care a bout others safety .
THE trees are dead one has already tried to fall but is only being held up by the branches of another tree!

We need many trees from Jubilee to Firhall. Rowan, Birch and some Beech would really revive a very tired and dead looking riverside.
Has anyone else got ideas for a replanting programme I would definitely give my time to help. Do KNB think that could be achieved.?

Ann have sent that message to Murd

3.40pm.there have been some lovely trees,in the said area,including a rare bronze barked beech tree,(the stump is still visible) all cut down for no obvious reason over the last few years,

Think the one you mean was badly diseased anon. Time to plant a few more though, around the riverside and all over Nairn

Well folks here you have the true mystery of what the tree was holding.Enjoy!!!You tube video Rescue WILD BEE COLONY Nairn April 2016