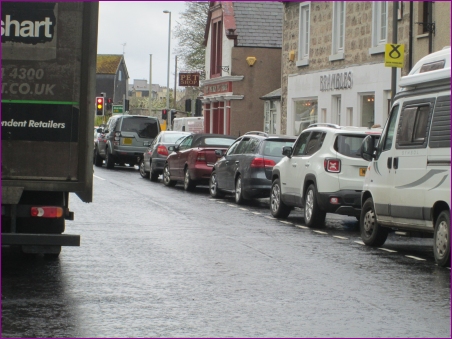 Readers may have noticed that after the resurfacing work the parking bay markings in Leopold Street were not fully reinstated - four of the bay markings have now gone. This doesn't seem to have bothered local motorists however who are still using the spots they have been accustomed to parking in over the years. Double yellow lines could appear however, in an effort to improve safety on Leopold Street.

At the regular meeting of Nairn West/Suburban in the Community Centre on Monday night Councillor Michael Green told the meeting that there would be a period of consultation over the conflict between the safety issue and parking.

"There are traffic orders for double yellow lines which would be back from the A96 but that would mean the loss of four car parking spaces but the other thing is there is the safety element because there is a real choke point, a bottleneck and folk are going up onto the pavement and the traffic slows very, very slowly – it’s a kind of “who dares wins” – the scenario with two into one and a half and it’s difficult. So, the Council is going to wait and see how it pans out on the one hand it’s safety and traffic speeding an awful lot quicker through the town centre, it is a plus, but then on the other hand we’re losing four parking bays. So we've just got to wait and see how local opinion feeds back on that."

Dick Youngson the Chair of West/Suburban CC told Michael Green that there should be a disabled bay on Leopold Street.
Posted by Graisg at 7:50 AM

Great news that the 4 worst parking bays before the traffic lights may be going. It has long been a shambles that part of Leopold Street, causing a lot of delays as it is so restricted. May not be good news for the Pet Shop who could lose some customers though, as people are reluctant to walk anywhere nowadays.

a disabled parking bay in leopold st would be good,although it would still be abused by abled bodied people,
the police don't seem to care who parks where

Narook, re the specific spot you talk about - get a picture and put up on Facebook Nairn site "parked like a knob".

First it was folk (of all ages) riding their bikes on the pavement now it's vehicles of all sizes; cars, lorries, vans parking on the pavements. May I respectfully remind all those who should be on the road that pavements are for pedestrians.