“Give me a map and I’m magic!” - new orienteering course in Nairn

“Give me a map and I’m magic!” That’s the message from some of Nairn’s youngsters who have been trying out a new orienteering practice course that has recently opened on the Links.

With the support of Inverness Orienteering Club and the Nairn-based Davidson Trust, a section of the map used for last summer’s World Orienteering Championships Sprint Relay has been adapted so that local folk can have a go at orienteering in their own time. This idea is that people can pick up the general idea and will gain confidence in using orienteering maps before trying one of the many events that are organized by local clubs.

“We wanted to make this a simple and free facility, particularly so that schools, scouts, brownies, guides and family groups can access it easily” said Mike. “So rather than have maps on sale, the maps and instructions can be downloaded free of charge from the UK-wide permanent course directory hosted by British Orienteering. You can go on to the web site to find out details about permanent courses all over the UK, and, in the case of Nairn, download and print your own maps free of charge.” The facility will also allow the club to keep track of usage. If the course proves popular it might pave the way for funding for more permanent courses similar to others that have recently opened at Bught Park and Ord Hill in Inverness.

There are 10 control points marked by small but distinctive markers bearing the iconic red-and-white orienteering kite mark. The controls can be visited in any order, but there are 3 suggested routes varying between 1.3Km and 2.9 Km that can be used as a map-reading exercise at walking pace, or as a running time trial for those with a competitive streak. The identification plates are numbered so you can be sure which one you’re at. An added bonus for schools is that the numbers match the electronic markers from the “Sportident” electronic event equipment that is available for schools to borrow. This means that the courses can be used for realistic orienteering races with electronic timing like that used by the world’s elite last summer. This can be loaned from Inverness Orienteering Club’s schools development team through Active Schools Co-ordinator Gregor Campbell. 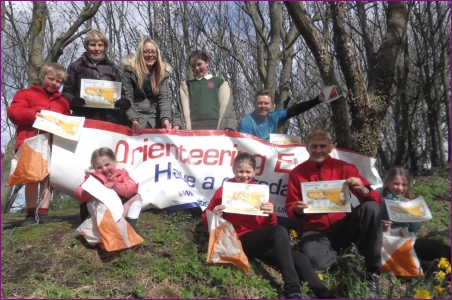 Nairn area schools have been taking part in the Inverness Schools Orienteering League competition. There were 28 pupils from Cawdor and Rosebank among the 164 youngsters who took part at the latest round at Craig Phadrig in Inverness last Wednesday. Cawdor have the bragging rights over their big-city cousins, sitting 5th in the league to Rosebank’s 6th. The final round is being held locally at Carse Wood near Arderseir on Wednesday 18th May. Entries for the schools competition is done centrally through Active Schools, but after the schools races, the courses are also open for the general public of all ages to run.

Meanwhile, Inverness Orienteering Club has opened bookings for a block of Wednesday-evening family coaching sessions starting at Nairn East Beach on 25th May. These are aimed at ourdoorsy families looking for something they can all do together and who want to fast track themselves in to orienteering. Details of this and other local orienteering opportunities in the Nairn area and to the west can be found at www.invoc.org.uk , while events in Moray are at www.moravianorienteering.org. A short drive over the Dava Moor will take you to the Badenoch & Strathspey club’s area (www.basoc.org.uk) where some of the best orienteering terrain in the whole of the UK can be found.

The permanent course maps can be downloaded from www.britishorienteering.org.uk/pocs
Posted by Graisg at 6:36 AM