A P&J report here about the shock figures. Regular readers may recall a Gurn article from February 2014 however, entitled: "Highland Council on course for a billion pounds worth of debt by 2016/17?" We reproduce it here - not quite so much of a shock really.


"This observer has been looking at the documents attached to the agenda of yesterday’s Highland Council’s Finance Housing and Resources Committee and more specifically item 8 of the agenda which was a Treasury Management Strategy Statement and Investment Statement – 2014/15.

Below is a screenshot of page 17 of that document (click to enlarge). The capital financing requirement for 2016/17 is a real biggie at £1,013.4 million – you can see from the legend that borrowing is involved in that.
The bottom row gives figures that seem to be pure borrowing however – “Treasury Position This indicator shows the expected borrowing position, net of investments.” An estimated figure for 2016/17 is £937.4 million. 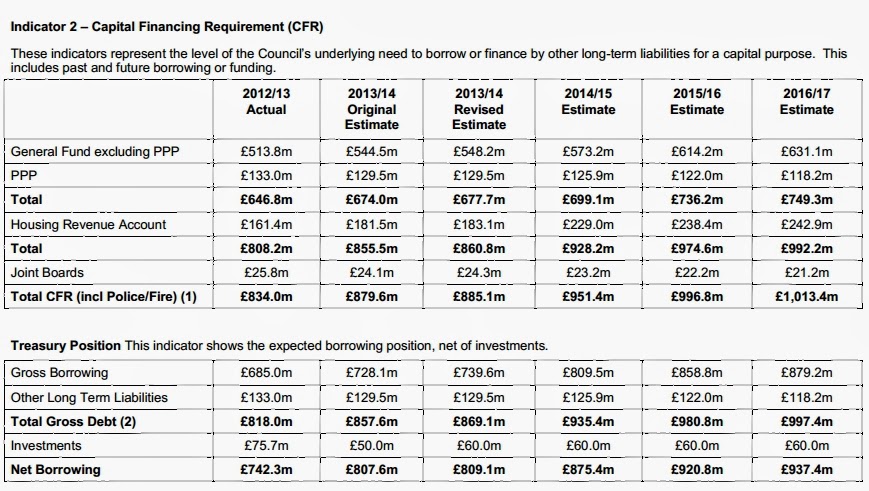 Figures on the page then and daunting perhaps for those not of an accounting mind. Worrying too? The Gurn today asked Councillor Michael Green what he thought of these projections. Michael told the Gurn that he was very worried and he thought the figures were “unsustainable”."

And now there's no money at all it seems, River Community Councillors were told last night that there is no money to fix the puddle at the bottom of the steps at the Firhall Bridge - still money out there however for a plan to knock down the First Steps Nursery building at Rosebank to put a car park in its place and our Highland Councillors appear to be totally powerless to stop officials taking that plan forward. It really is a case of a puddle too far folks.
Posted by Graisg at 9:04 PM

A word from Murd
That also confirms what I said at both the C.C mettings they have no money to do any thing to improve and remove the danger on the Station brae.
A developer has put foward suggestions and I presume willing to pay for alterations.
There are people on and off councils who want to stand in the way of that but they all agree the danger exists and has to attended to!.
Some seam to think building a new bridge is the answer as was the the answer to my request for A ramp at the Firhall Bridge plenty of verbal support and no action.
A new bridge the railway would achieve nothing and one at Firhall IS NOT NECESSARY. So unless they let some one who is willing to pay for the job get on with it the DANGER will remain on the Station Brae.
Some of the people who are agents A developer. We have elected to represent us have not put what I think any sensible suggestion's forward and others nothing at all on how they would remove the danger.
So there you have it ether let some one pay or live with what you have got.
Something I have been tould about another bridge just forget it and get on with what you have.
MURD

You don't have to be an accountant or a finance expert to understand Highland Council's problem. They are running their budgeting in the same way as anyone who overspends on their credit card..... and they face the same eventual fate.

The Council is spending more each year (not just on road-maintenance and public services, but on education, welfare, social services etc) than it receives as income (in council tax, rates, and government grant). So they have to borrow money (=run up a debt on the credit card) to provide all the things that people in the region want but are reluctant to pay higher council tax for. Banks are willing to lend (=give them credit). But at a price: interest payments straight away, and - eventually - the loans have to be repaid.

Unless the Council's income goes up, or the spending is cut, this approach eventually becomes unsustainable (as Michael Green points out). All the revenue could eventually be swallowed up by interest payments and repaying past loans.

When an individual builds up massive credit card debts, there's no way to wish them away. Similarly the Council would be foolish to think that those who lend them money will simply write off what they owe, or that any government would bail them out.

The council needs to focus a lot more on how it can attract and generate more investment and income. It needs to spend its money on those things - like better infrastructure, communications, broadband, and the environment - that will attract business, create jobs and increase revenue (for example from tourism). Spending the Council's limited money on subsidised housing and enhanced social services won't improve their cashflow or help them reduce their debts. We can argue for cheap council housing for our, or Murd's, children. But the consequence of delivering that is that they, and their children and grandchildren, get landed with paying back the money borrowed to build them.

Time for a reality check and for some tough love? People in the Highlands need to realise that there is not going to be a magical get-out-of-jail solution. No fantastic new oil boom. No windfall (ha ha) from renewables. No money growing on trees. Not much in this world comes for free....

Well let me put Anonymous skinflint right in the picture. Cheap council housing for our, or Murd's, children.
ALL but one of my children have bought there homes in fact one has bought two.
One EVEN PAID CASH ON THE NAIL
You may BE TRYING TO MAKE A POINT. But when you use my NAME in statements like that put your YOUR NAME TO IT and get your the facts right.
Being A skinflint you probably never helped your children acquire A home of there own assuming you have children as the do cost money to bring up.
Thats my gripe over but young families do require homes no one will build them free. And some are being stopped at the moment from building houses of any kind.
My SAYING on that one is Nairn needs houses GET them BUILT
MURD

Disgraceful lack of financial control, Highland council needs to become much more streamlined get rid of the vast amounts of dead wood that are clogging up and draining much needed funds, for a start half the number of highland councillors.

Highland Council has spent £65M on the West Link Road, and replacement golf courses, and rugby clubs, that 80% of the Inverness Public don't want. If that isn't a profligate, unnecessary waste of money, I don't know what is. It is all very well saying poor Highland Council, what an awful situation they are in, expenses exceed income, but when they provide such a blatant example of stupidity, it's hard to have any sympathy for their situation.
Maybe the £315M City Deal can be used to pay off the £1 billion debt, so that when interests rates go up, our Council Tax isn't used solely to service interest payments. Fat chance of that happening. They'll be buying something twinkly to dangle in front of their constituents.