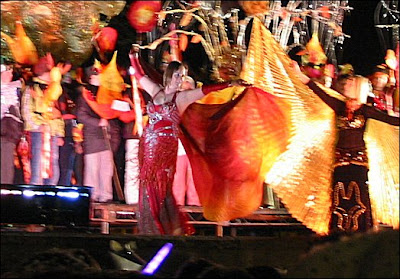 Another fantastic winterfest success. Here's the Provost of Nairnia doing her bit to free the kingdom from tyranny. More pictures later.
Posted by Graisg at 7:56 PM

Switching on the Christmas lights has sure changed since Sandy's day!

I have been getting a number of people commenting on last nights event, from members of the public and from those partaking saying that the organisation of the event leaves a lot to be desired e.g. crowd control (not enough stewards ensuring procession has easy and safe route through high street) and also the late starting of the event ,which i believe was around half an hour late starting ..If we are advertising our town in the grand scale that we are doing, attention to detail is foremost .the last thing we would need is for a small child to be injured in some way and then we would be getting the kind of publicity we dont need ! This is a great event for Nairnia sorry nairn (lets have something new next year) so maybe the organisers could not only concentrate on the wonderful work they have created but also even more important safety and time keeping.

Not sure about the start time Doc, did notice however several people in wheelchairs were moved from their spot outside the chipshop by the organisers and police after being in situ for quite some time. That needs to be sorted for 2009.

Thanks for your interest in NAIRNIA 2008. On behalf of INSPIRE, the young people's working group responsible for its organisation and delivery, I offer the following comments to A Gurn from Nurn.

Timing - The advert in the November 25 edition of The Nairnshire Telegraph clearly stated that the event began at 5.45pm with the Howlin' Gaels at the Courthouse, before the 6pm start for the procession - these timings were adhered to.

Stewards - There was a ratio of 1 steward to every 8 participants (well within the recommended guidelines) made up of 15 'key' stewards, plus each participating group's own contingent of teachers, parents and other volunteer helpers, plus a procession director, 4 'trouble shooters' and 6 technical staff as well as the police, traffic wardens and first aiders. The 'key' stewards attended a briefing session in advance of the event along with the Police, who were happy with the safety aspects of the event. The safety of participants and spectators is and remains at the heart of this event - that's the reason for the official street closures, raised stages and crowd barriers.

Any concerns regarding wheelchair users will be discussed at the planned feedback sessions in the new year and the organisers will take into account any comments when planning their safety in 2009.

INSPIRE decided to make NAIRNIA the annual theme of the event for three main reasons:
Logistics - with the resources available, delivering an event, which has a recognised shape is easier as the participants don't have to start from from scratch each year.
Finance - the available finance goes a lot further by building on what's already been created.
Artistic - with NAIRNIA as the theme, there an opportunity to develop it to embrace more and more groups and individuals in the area. In this way, Nairn could become a significant event destination at this time of year, with visitors being drawn by the procession and its comlementary events over a growing number of days, with potential bemefits for the whole community.

Have to reply to this. 1 I gree in some way that the Nairnia thing should not be repeated, instead it should be built on. Why not change the story or make to a sequel? I think it is great for the kids.

2 I agree that the stewards did as good a job as could be expected but where else is there for people to go? They have to walk somewhere and if that means the road then so be it.

Lets just keep this original to Nairn and not let the Inverness...Sorry Highland Council steal it from us.