One or two of our readers have expressed how delighted they are with the appearance of the new flats in Harbour Street. The sun was out on Thursday and we nipped down for a picture. 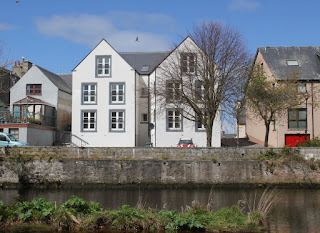 Local businesswoman Sheena Baker is enthusiastic about the new building too. She told the Gurn:

"“I have watched the methodical progress of the development of these flats for many months and now they are finished I feel praise must be sent to Stewart Morrison and team that built them.

They have transformed that area of town and the attention to detail in the design and finished look of the building is noticeable. I am sure the internal detail and quality will also be of a high level providing some lovely flats for folks to live in.

How lovely to be able to say congratulations to someone who has added to the look of the town.

A heartfelt well done to Stewart and all the trades and designer team that played their part in the project.

I look forward to seeing the finished article when Rosebank Church is converted to flats. Some way off for that one but should also be good when the project is completed.”

Imagine if the same level of design had been implemented at the Harbour? Instead of the dowdy uninspiring boxes.

So these were approved by the baddies in sneckie. The harbour scheme by the beloved toon?