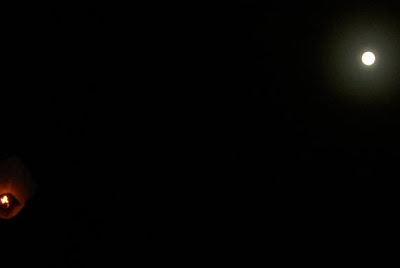 Marie from Scotland Made Easy has sent us a picture she took of a Vietnamese lantern heading skywards across the hogmany darkness. Did many Gurnites see the procession of lanterns heading towards the moon after the bells? They made an amazing sight indeed and added very much to the occasion.
Posted by Graisg at 6:34 AM

Email ThisBlogThis!Share to TwitterShare to FacebookShare to Pinterest
Labels: Hogmany

They look very pretty, but the potential problems of sending burning materials into the sky, without a thought as to where they might land, are enormous.

True, with a covering of snow on the ground, they are unlikely to cause fires. But used in the warmer times of the year, there is a real risk of starting a blaze in forests, growing crops, farms and thatched roofs. People could easily be killed in such a situation, particularly at night, where they were unable to escape.

Sure, they should burn out before coming to land. But if they don't? Even rocket science isn't perfect.

Jim they are banned in North America for this very reason. Snow cover will not stop a pine tree from going up in flames.
Even with our tar and asphalt roofing materials over here there is a worry of peoples houses being burnt to the ground.
While they look spectacular Im not sure it is worth it.

I saw the lanterns and thought they looked great! They did indeed seem to be heading silently towards the full moon. It was a beautiful night and we even heard an owl hooting to add to the occasion.
Much better and more magical than the fireworks which were going off! Probably less dangerous and certainly much less noisier than fireworks.
Let's have lots more next Hogmanay!