Police are looking for two youths who pushed Joe Telfer into the river this evening just by the sewage pumping station. The tide was out and he fell 12ft into the river, fortunately his fall was broken by mud and less fortunately for the creature concerned one of the young swans. He missed the many large stones and metal objects in this part of the river. A badly shaken Mr Telfer refused a lift to the hospital from both police who were quickly on the scene and others who came to his aid.

Joe is a controversial figure and has upset a lot of folk over recent years and this might have been related to one of those incidents or more likely it was just a chance piece of reckless stupidity, either way it could have ended up with a murder charge and it is no way to behave towards any human being and anyone with any information should contact Nairn Police. 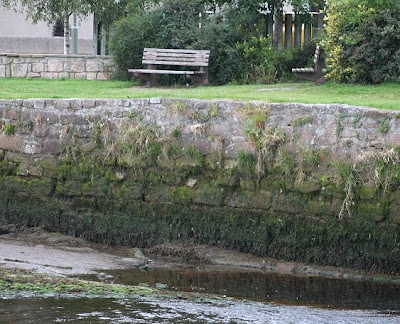 The scene of the assault
Posted by Graisg at 8:15 PM