Two boats burnt out at the Harbour 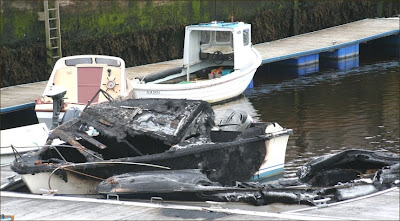 Two boats caught fire in the harbour last night with fire crew attending at 2:00 this morning. Both were moored on the south pontoon (nearest the sailing club) and, by the looks of it, they are total right offs according to a gurnite who has sent in this information. The south pontoon was closed by police tape and the boats will be inspected by a forensic expert today to determine if the fire was started by an electrical fault or whether arson was involved. Picture will enlarge. Another picture here.

The BBC reports: 'A 17-year-old girl has been detained by police in connection with a fire that caused damage to four boats tied up in a harbour.' More here.

Email ThisBlogThis!Share to TwitterShare to FacebookShare to Pinterest
Labels: Harbour