Another very good performance from Peter Peter Beaton. The Gurn understands he has had a change of car which he collected at 8pm on the day before the McErlan Masters rally which took place in Kirkistown, North Armagh on Saturday 14th of this month and he never really got to test it just a wee spin in a yard. So it was straight out of the frying pan into the fire. He did really well learning a new car and coming third overall. Attached a picture of him and his Irish navigator Kenny Foggo. 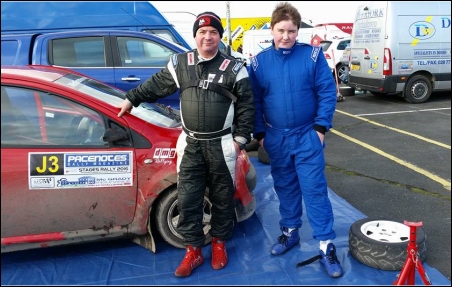 The second round of the 2016 McGrady Insurance ANICC Junior 1000 Rally Challenge Ireland, in association with Rallysales.eu took place at Kirkistown, for North Armagh Motor Club’s Pacenotes Stages event. Just four Junior 1000 crews lined up for the six stage event, in cold but generally dry conditions, as the 14-17 year rally stars of the future took to the mixed surfaced special stages.

Round one winner was 2015 champion- Josh McErlean, and the 16 year old with co-driver Tommy McErlean in his familiar Peugeot 107 was to assume the lead position again. Indeed the Kilrea teenager would set fastest time on each of the six stages, and was delighted as he crossed the finish line. “It was a very enjoyable day, great stages, and great fun out there. We kept on pushing and it went well” said Josh.
Indeed the event was ideal preparation also for an assault on the English Junior 1000 series and with the first round next month the MacSport team are well warmed up.

Expected to be second were 15 year old Peter Bennett with co-driver Arthur Kierans, the reigning Scottish Champions debuting their sleek black Skoda Citigo. Teething problems had prevented the debut on round one and just before stage one the car went into safe mode, clocking up the team two stage maximums. However the Loughgall teenager started to learn his new car by stages three and four. “It’s different to the C1” said Peter. “It definitely is going to need more time to set up, and to get used to the engine and gear-box, but it’s good to get it here.” Indeed fourth place was the result, but by the final stage, Peter was within four second of Josh’s time, showing rapid improvements with the new machine.

16 year old Ruari Bell once again made the trip from London to contest a round of the series, with his Peugeot 107. He had the experienced Damien Connolly in the co-driver’s seat, and once again closed the stage gaps to the flying Josh McErlean. Ruari’s drama of the day came on stage two, breaking a drive-shaft and taking a maximum time, but he recovered to score his best Junior 1000 result in second place.

Scottish visitors 14 year old Peter Beaton and co-driver Kenny Foggo, came all the way from Inverness once again, as Peter and his family have made a commitment to contest the series. Another commitment they made the night before the rally was to purchase the ex-Michael McGarrity Citroen C1, with Peter having his first proper drive in the car on stage one. It was an improvement from his Nissan Micra, and the Scottish teenager once again loved the challenge of the Kirkistown circuit, bringing his times down significantly through-out the day.

The series heads for round three, which now be at St.Angelo, Enniskillen on May Day-2nd May, for the Enniskillen Motor Clubs popular event.

Junior 1000 Driver Championship Points after Round 2

Regulations and points for the series are available on www.anicc.org.uk
Posted by Graisg at 7:13 PM