We’re sorry to hear from Murd that his brother Hamish has passed away. Regular readers will know that Hamish contributed some interesting articles about his memories of Nairn in recent years. Hamish was 93 years old and his memories went quite a way back too, here for example you can read Hamish’s recollections of the opening of the Harbour Basin and here Nairn shopping in the 20s and 30s. 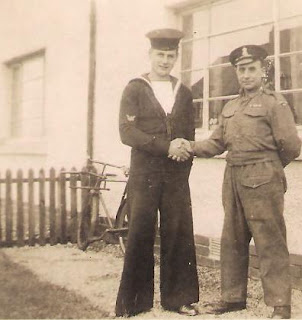 Hamish was a mechanic before the war and joined the navy shortly after the outbreak of the conflict. He rose to the rank of Petty Officer. He served on HMS Tumult in the Mediterranean in 1944 and some of the action he witnessed is detailed in this page here. After the war he settled in Surrey where he joined the fire brigade finishing his career as Chief Officer. Thanks for your contributions to the Gurn Hamish they were very much appreciated by many of our readers.

His brother Murd told us: 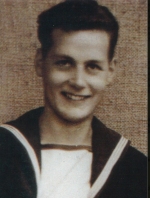 aged 93. Over the years he was A very good source of information for the Gurn with his knowledge of Nairn back in the early years before going off to war. A time for our family to reflect on his life and achievements."


The picture above shows a young Hamish  home on leave during the Second World War and visiting his father Duncan at 15 John Street.
Posted by Graisg at 12:26 AM

Sorry to hear that news Mr Gurn. Thoughts are with you Murd and condolences to all Clan Dunbar. I'm sure you'll have some great memories of happy times.
C

Condolences to Murd & his family at this sad time.