Another March, another millennium

The Second World War recedes further and further into history and soon the 65th anniversary of the Normandy Landings will be commemorated: commemorated along with controversy that not enough was done by the public purse to help the veterans themselves attend in person.

'Whilst I don’t disagree with such Services I’m not sure that persons wishing to attend should receive help towards their expenses. I’d say there are veterans of the landings in Sicily; Anzio; Salerno and the South of France who would like to know that if similar Services were held they could get some financial help to attend.' Comment from our correspondent Hamish.
With all our perceived troubles in this credit crunched world of 2009 do we do enough to acknowledge the debt we owe to those that fought against fascism and quite literally saved the world from darkness? We are free to gurn about almost anything but the freedom that we enjoy to do so is only there thanks to the sacrifice of others. We can criticise politicians and leaders in public without fear of retribution and the knock on the door from the secret police. We owe these freedoms to those that fought in a conflict that suddenly seems to have happened so long ago.

Recently the brother of our regular contributor Hamish Dunbar gave the Gurn a collection of documents detailing a little of Hamish’s war service in the Royal Navy. We’d like to present the details of the month of March 1944 from a diary kept by one of Hamish’s comrades aboard HMS Tumult. Another March in another age as experienced by a young Nairn loon.

7th For the next week anti-submarine patrols are carried out with Tuscan, Exmoor, Brecon, Blankney, Qunatock and Brocklesby. One U-boat was intercepted and sunk. Forty-two survivors were picked up.

15th Returned to Naples and left with Laforey, Tuscan, Miaules and Brecon on anti-submarine patrol.

22nd returned to Naples. Mount Vesuvius erupted. Apparently the most violent eruption in one hundred years.

25th Wind veered, we are covered with lava dust from Vesuvius. Left for Capri.

26th Some of the ship’s company involved in a fracas with U.S. sailors on shore.

27th Finished cleaning lava dust and left for an anti-submarine sweep with Laforey and Ulster.

29th At 0437hrs Ulster reported a submarine’s contact which we confirmed and depth charge attacks made. HM ships Wilton Blencathra, Hambedon together with U.S. patrol craft joined the hunt. Ulster ordered to Palermo to take on more depth-charges.

30th Shortly before 0100 the submarine surfaced and we made contact on a dead-ahead bearing. We engaged with our for’ard guns and closed range. At 0100 torpedoes from the U-boat struck Laforery amidships port side and she sunk soon afterwards. The submarine was now illuminated by star-shell and was seen to be hit frequently by gun-fire.
She finally sunk by the stern at 0110 hrs.

We commence to look for survivors. Six officers and seventy ratings from Laforey together with twenty-seven of the U-boat’s crew were picked up. 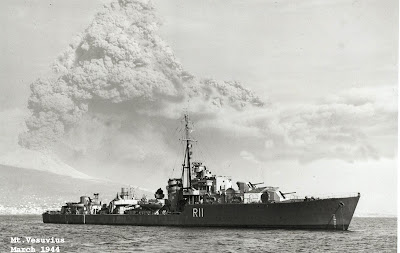 HMS Tumult with Mount Vesuvius in the background
Posted by Graisg at 9:35 PM

Interesting post. My husband and I both have family that served in WWII.

We've also had the honour(if you will) of walking on a D-Day beach. Very humbling.