Former Chair of Nairn West Community Council Rosemary Young has been kind enough to give us a copy of her address to the first meeting of the New West/Suburban CC she helped to bring about in her last term of office:

2 To work towards a single CC

3 To deliver a message to this town that tourism was important, real and here and therefore the town should be well presented for all as well as visitors

I have worked in this sphere now for 22 years actually trying to promote tourism in Nairn or really to try and deliver to our visitors a well presented town.

It has been a chapter of ruinous buildings and litter and dog poo and seagull poo, gutters with trees growing out of them, which is constantly on the agenda at CC.

The tourists are here but time and time again they are presented with the aforementioned and the fact that the most centrally positioned Social Buildings a true gateway to the town still remains a derelict building despite the good efforts of many in this town which have been constantly thwarted is a travesty! Tourism brings wealth to this town lets try and understand that. It seems that the good work of the flower group are the only people who understand this."

This observer would imagine there are many other gurnites who would rather see the money spent on charrettes, plans, workshops, consultants etc simply spent on what needs doing now but reinventing the wheel has been a feature of Nairn Civic Life for many years. Could we finally be managing to get somewhere however with the economic initiatives that are coming along under Sheena Baker and NEI and, despite a recent and at time fractious AGM, Alastair Noble of NICE is fairly bullish that things are at last possible.

Up until now Rosemary the other usual suspects have been forced to put their energies into defending Nairn from inappropriate intervention from those who wish to tell Nairn what they think is the way we should proceed. Imagine how we might get on if the planners and others actually started to do what the community wanted - imagine how the talent and creativity in Nairn could be utilised for the common good? A new age of localism and community empowerment dawns or more of the same? Will the banners and the t-shirts have to come out again in the future? 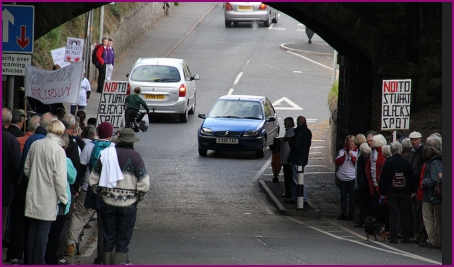 More pictures of that day here and a video here.

@anon thank you for that but we'd better not post it.