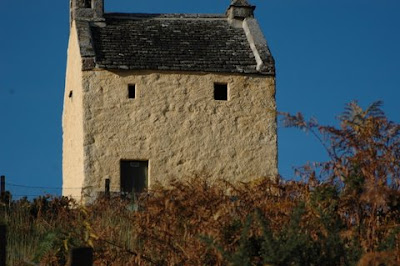 Billy was up at Ardclach today and sent in this picture. It might have done as an illustration for this Gurn post but perhaps it is another opportunity to dip into the writings of Robert Thomson:
"Strange as it may appear, the Bell Tower does not stand on Church land at all. There is no authority, so far as we can learn, by which a Presbytery or heritors were ever empowered to erect such buildings, and even if they had, it is evident that they could only have done so on their own property. Accordingly it is supposed to have been originally used as an estate prison, and that the Laird of Lethen, who was the patron of Ardclach, and a staunch Covenanter, allowed the Kirk Session to use the building, from time to time, when it was not otherwise required, first as a place of confinement for the moral delinquents in connexion with the congregation, and thereafter as a " bell house," on account of its proximity and situation."
Ardclach - not an English name, just bad spelling of the Gaelic Àird Chlach :-) The height of the stones. Read more about Ardclach Bell Tower here.
Posted by Graisg at 5:33 PM

Email ThisBlogThis!Share to TwitterShare to FacebookShare to Pinterest
Labels: Ardclach