This observer cannot help but think that the public sector unions are walking into a trap in the same way as the miners did back in the mid-eighties. Could Cameron set aboot them in the same way that Margaret Thatcher destroyed the NUM as an industrial force? Could it be that some sections of the Tory party will be delighted that a fight with the unions will take peoples' minds away from other issues?
One can understand the emotion around changes to pensions etc but again it might be suggested that some local government employees (such as many teachers) earn salaries that many people in Nairn can only dream of. Have the unions picked the wrong time to make a stand with so many people in less fortunate circumstances suffering too? Have your say in the Gurn poll in the sidebar.
The BBC is reporting all schools in the Highland area being closed today and it seems that way across Nairn this morning. The service point at the Courthouse was closed too but the library (now run by an arm's length organisation) was open. The gates at Nairn Academy were still open even if no teaching was taking place today however. There were over a dozen private cars in the car park and some vehicles belonging to workmen who can be seen wearing white protective clothing in the second picture below. 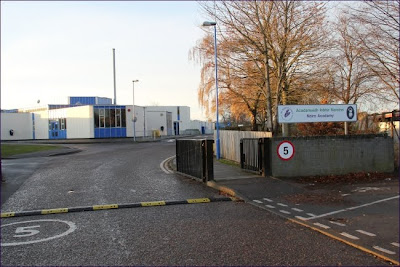 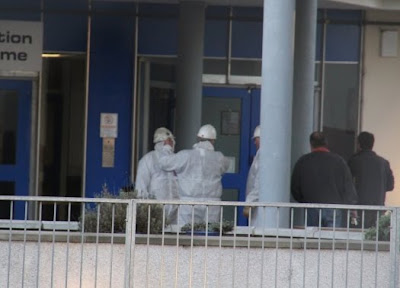 The strike is a complete waste of time. The government will win this hands down, as nobody nowadays can afford to lose a days wages. Not only that but the state of the economy and the world wide depression is surely a time to pull in your expenditure and not to go on an unwinable strike. Any further union moves for strikes will be unsucessful and the possible demise of them will occur.

'Anonymous' - I identify you as Danny Alexander and I claim my £5 !

Mr Gurney Man - it sounds as though Dave and Gideon's Eton Rifles divide and conquer approach is getting through to you with your implied 'race to the bottom' comment regarding teachers salaries v the average Nairnite. Don't fall for it.

I'm not a public sector worker but support the aims of the strike, however as a council tax payer I'm not for the day off that the HC has seen fit to give all workers

This is our money and I'm certainly not being paid to take a day off. Badly judged decision by HC if you ask me

I'm a private sector worker and I'm not falling for the Govt propaganda. Despite the PM telling us "we are all in this together" the Tories are deliberately trying to set the public sector workers against the private sector workers. The Tories love confrontation. Always have, always will. Inciting workers to strike to defend themselves and their families risks tearing British society apart. Shame on this ConDem Govt. He may be the local MP but Danny Alexander is an embarrassment.

line them up said...

The tory cabinet contains 14 millionaires and 3 billionaires, who in society do you suppose they are really looking out for?

Thatcher may have destroyed much, but then just as now the tory government will ensure that the poor get poorer and the rich get richer

How many poor bankers does anyone know post the crash of our financial systems, and when are the banks going to pay us our money back - never

No one enjoys being on strike, but what other real options are left when dealing with this government. Have we really been reduced to the point whereby we should feel lucky to have any job, and therefore pay and terms of employment should just be ignored?

I'm a public sector worker but I earn a lot more than a teacher. I have paid into my pension for many years and deserve a good pension. Is it my fault that some people are incapable of earning large salaries ? No its their fault for whatever reason. I did enjoy the day off work today and got lots of xmas shopping done !

Why do the gov want people to work till they are 66.young people have no jobs, but they , the gov. think there is work to keep elderly people going to that age.
Imagine a child being taught by someone of 66 who really won,t be interested by then, but they will have to stay or leave and get a much lower pension, worse still imagine having to teach at that age I am not a teacher but I can see what it would imply.
Also how do people work to that age if they have a physical job. It just doesn,t make sense. Get the young people working that should be the priority, it would make more sense.
A lot of people will probably opt out of pension funds now, ironic when the gov. have been trying to persuade people to take out pension plans for years
Just because some people live longer doesn,t mean that they are fit at 66.

@ line them up - I'm sure a lot of top tories are worth a shilling or two but please could you tell me where you get your information about 3 billionaires etc from?
Let's not forget a lot of Labour people and Fibdems are worth a few sheikles too.
Infact sometimes I think you could hardly put a rizla paper between the three main parties they are all just so much the same regardless of how much dosh they have as individuals.

I'm worried, we pay India tax payers money from an overseas budget. Fine, but their economy is growing, ours is not. They are on the way up, we are on the way down. In thirty years time will we have slums and ghettos whilst India has wealth and prosperity?

And back to the point in hand, public service workers have to pay towards their pensions, so to be told that the money one has paid to their retirement is no longer available is criminal.

Time to live in the real world said...

Why shouldn't public sector workers not have to contribute more towards their pensions? When I reach pension age, 67, I will only get the state pension. Part of my taxes and council tax go towards paying public sector pensions, this means that I am paying for people who get higher wages than me to have a far better retirement than I can hope to have.

Look, if you dont like the terms or conditions of your employment, go work elsewhere! On second thoughts, no one in the private sector would employ you. No, your better off staying in the public center. Good luck with the strikes!

The tories must be loving this, they've managed to spit the nation by employment status public/private

Worker against worker rather than us all against this government.

Their friends the bankers got away with murder, and they've now got us the victims fighting each other

Wake up people, we were mugged and the government is making us all pay for it

Summed up perfectly by "smell the coffee" Could'nt agree more, why can people not see this ?

Someone commented that "they would only get the state pension when they retire" Some public sector workers contribute a big percentage of their wages every month to get a second pension ,it is a choice not compulsory.If everyone was to accept just a state pension it would make money tighter for the gov. and we would all be getting a much smaller state pension...and that doesn,t bear thinking about....maybe we should all opt out...it might give the gov. something to think about. Who would they con out of their hard earned cash then?