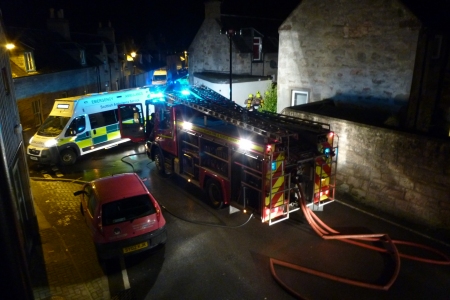 This image received by the Gurn around 18.15 this evening from Iain, a local resident. He reports two fire applicances, amublance and police in attendance at Junction of King St and Simpson Street. Larger image here.
Update 18.51 - the Gurn understands that one woman was taken away in an ambulance, an eye-witness said she looked conscious and alert however. Emergency services are still very active around a property in the area.

UPDATE 20.12: Northern Constabulary Press Release: "About 1750 hours on Sunday 9th December 2012, Police were called to a house fire at Simpson Street , Nairn.
Fire units from Inverness and Nairn attended along with an Ambulance.
A female was removed from within the property and is currently being treated for smoke inhalation at Raigmore Hospital, Inverness.
There is no danger to adjoining properties and the fire is not being treated as suspicious."


Late night shopping in Nairn Wednesday 12th & 19th of December.
These businesses and many more will be open - more details on this Gurn page.