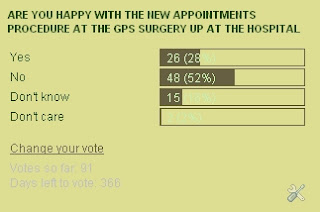 The Gurn poll on the new appointments system at the hospital was curious in that a majority of voters were unhappy with the system yet all the comments that came in were positive. One would have expected a sprinkling of horror stories to counter the positive comments but none came in. Of course such a poll is unscientific but was the voting perhaps an indication of a more wider unhappiness with the practice? At River Community Council’s meeting last night Simon Noble related what he’d heard at a recent patients’ participation meeting. He reported that the practice acknowledged that they needed to speed up response times to the calls made seeking appointments and also they needed to work on communication in general on what the practice does. He also stated that the number of missed appointments have dropped dramatically and the practice was feeling a degree of satisfaction after the first five weeks of the new system.

Did you go to the Transport Scotland Consultation in the Courthouse yesterday? Picture here from Murray MacRae. Did you think it worthwhile?

Mixed reports from the first of two late night openings sessions on Nairn High Street. Bratach took a couple of pictures. The weather has turned white, it had that kind of promise about it all day from the moment when the first rays of sun struck the Petronordic out in the Firth. The vessel had a dramatic back drop as waves of freezing fog rolled down off the Black Isle. Out in the east it looked as though Morayshire might have been booked in for a snowflake or two ahead of more westerly areas.

Thanks to the regular reader that forward the URL of Ray Colliers latest prose on the River Nairn  - available on the Guardian site.

Once again River CC last night was the best show in town and a lot was achieved last night on the roller-coaster of local democracy and debate. A chance afterwards for a quick pint in the Seaforth with Tommy and some of his Community Councillors and regulars including Alexander Brodie, there may be strong debate about Kingsteps at CC meetings but Christmas goodwill also abounds. More from the River CC meeting soon.

I am one of those who voted on your site about the doctors appointments system but didnt make a comment. The reason I didnt was because to tell my story would mean the doctor who dealt with me could know who i was and I’m worried this would affect how he would deal with me in future. I do not like this new system.