Some of the Gurnshire twitterati might have seen Claire Brodie (picture below) participating in a twitter conversation that is ongoing between Liz and members of Clan Brodie. In one of her posts Claire mentioned a novel she was writing about Gruoch, the wife of MacBeth. This observer does know that there are efforts to rehabilitate the reputation of MacBeth. I remember reading recently that he was Scotland’s last Gaelic speaking king and his reign was just about the antithesis of the story as spun by Shakespeare. I was intrigued and asked Claire if her novel would mention Nairn. She told the Gurn: 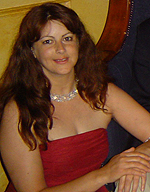 “Nairn and the surrounding areas will be mentioned. It plays a very significant part not only in my wee novel, but in the history of Scotland. I thought it was about time that everyone knew.  A lot of Scottish history that is told today, is from the writings that came about after the times of Malcolm Canmore and his wife St Margaret, but the area of Moray was a stronghold for supporters of Gruoch and MacBeth and their line for many generations thereafter. I am not a professional historian, by writing my novel I invite anyone to review and reach their own conclusions, however I hope to open the door and would be delighted to entertain lively discussions and debates.

She continued:”I found out about Gruoch after doing some research on my family tree, the infamous Brodies. So having delved so far I realised I would bore the pants of everyone if I just gave facts and figures, so I evolved the information I was learning into a novel. So Faction. In other words, I have several pieces of the puzzle, but I had to stick it all together using my own interpretation, therefore open to conjecture and this is a good thing.”

Claire thinks her novel could potentially have a positive impact on tourism locally: “I am hoping, not only to make my novel a success, but I have a very great feeling that that the scope for tourism to the area will be immense. Nothing to do with me, but with the information I reveal. I am now just tweaking and editing the novel. I hope to release on e-books in the near future for all to view. “

When asked for comment on the current Kingsteps issue she said: “Kingsteps, interesting name. Which King? Was it MacBeth? And his hillock, near Brodie? His burial mound? In 2008/9 archaeologists visited the Island of Iona to dig up MacBeth's grave, and found, he wasn't in there. Yes, a lot of interest in your area, and yes the Brodies have safeguarded the secrets for generations  We do have an interest to keep the area open for all, but at the same time, you are sitting on potential goldmine from a tourist perspective, a vested interest to allure folks to visit and protect it also.”

Claire’s Gruoch’s Legacy facebook page is here and she invites contributions: “ If anyone is wanting to post a link on my page to advertises local activities/businesses, more than welcome, I'm going global so tourists will pick up on it.”
Posted by Graisg at 3:57 PM

Nigel Tranter's MacBeth is also a good read and very different from Shakespeare.

Er... shouldn't your headline and subsequent article refer to 'Gruoch's Legacy rather than pay homage to one of the Marx Brothers?

Thank you :-) rectified, please accept a year's free subscription for identifying this error.