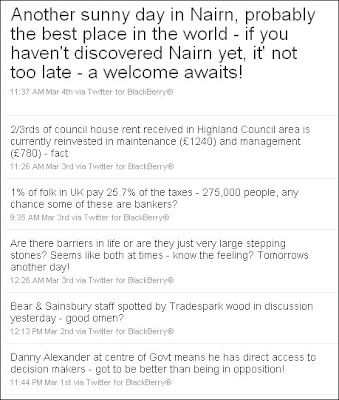 Oor Graham follows Liz's example and speaks to the digital masses via twitter. That only leaves Sandy and Laurie to share their thoughts on the micro-blogging site. You can keep up to date with the thoughts of your LibDem member here.
Posted by Graisg at 9:19 AM

No. According to the item in the Telegraph - it is the top 1% of the workforce not the 'folk' in the UK that are supposed to provide the 21.7%.

The trouble with snapshot stats is that there is always far more to it when you dig deeper and this depth is not something that can be easily hinted at through the medium of twitter.

And I have read that:

(Then of course we have indirect taxation which may or may not affect those on lower earnings disproportionately as they have to pay the tax element of the cost of petrol, heating oil, clothing, insurance etc out of a much smaller income.)