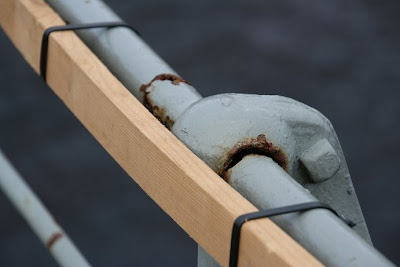 Update: more evidence of cheap repairs in Nairn?
Posted by Graisg at 11:54 AM

I hope this is a temporary fix? Hopefully we won't end up with this bridge closed along with the Bailey Bridge?

Looks as though someone has been playing a pibroch on the pipes at
the Firhall Bridge.Had smashing time
by the looks of it.

Every bridge that crosses the river Nairn is in need of repair, please mention this to the candidates that will be desperate for YOUR vote in May.

The council has to act to demonstrate duty of care by carrying out a temporary repair. If they did nothing and an incident occured they could be liable for personal injury claims.As a trainee accident investigator the action they have taken would be clased as acceptable in the short term as it is fit for purpose ie. it maintains a handrail to hold.

If I were you Anon. I would adorn my
trainee trainers and hotfoot it up to
the Fihall Bridge.Im sure you will agree its a long term Health & Safety
problem.

When the bailey bridge was closed to traffic the Davidson trust money should have been used to replace it. After all that money is supposed to be for the good of the people of Nairn and as far as I can see they only spend the interest on it.. anyone know better?
Closing it was a insult to the people of Nairn.