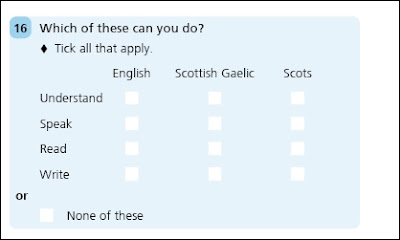 Question 16 Scots, Gaelic, English
Last time round it emerged tha there were about 200 Gaelic speakers in Nairnshire and another 100 or so with the ability to either understand or write the language but not speak it. The Gaelic question is quite easy really compared to the Scots one.
Here on the Gurn we get the occiasional very competent and witty comments in Scots. Perhaps the question often asked however, is what is Scots? According to the website Aye Can Scots is:

"Scots is the collective name for Scottish dialects such as 'Glaswegian', 'Doric', 'Buchan', 'Dundonian', or 'Shetland'. Taken altogether, Scottish dialects are called the Scots language. Sometimes Scots is known by the names 'Scotch', 'broad or braid Scots', 'Doric' and 'Lallans'."

So if you can understand folk from those places, and of course folk just across the border in Moray that still speak the local Scottish Dialect, then surely you tick the 'Understand' box. More details on Scots can be found on the Aye Can site.
Posted by Graisg at 11:52 AM

In any language, I'm still waiting for my form to arrive