Some Gurnites might have seen Jemma Tweedie performing locally but if not here's a chance to experience her material on the Gurn. 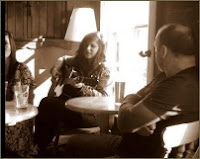 Jemma is a 19 year old, local singer/songwriter who is currently working on her first EP due for release on 26th October. In the run up to this she has been spreading her musical word to the likes of BBC introducing, Radio Clyde's Vic Galloway and new up and coming artist Jake Bugg. Having sparked interest from several others she is now preparing to perform at Bogbain Farm as the local support act for Charlotte Church on her lastest UK tour.

Having received her guitar as a Christmas present last year, Jemma quickly found a passion for songwriting and since then she has been performing at small venues around Nairn, Glasgow and Aberdeen. This observer enjoyed listening to tracks she has placed on the Soundcloud site. One of them below plus more of Jemma from Youtube.
Drunken Coastal Town (Preview) by Jemma's secret soundcloud

Jemma has a facebook music page here.
Posted by Graisg at 9:26 PM

Another hidden Nairn gem – I mean Jem. Well done Jemma great sounds and proud dad looking on in the pic. Super to see someone writing their own material and music so soon after picking up the guitar. Keep on strumming. Look forward to hearing you sometime!

She needs to put some work into making her vocals clearer. Her lyrics could be the best in the world but not much good if we can't hear them