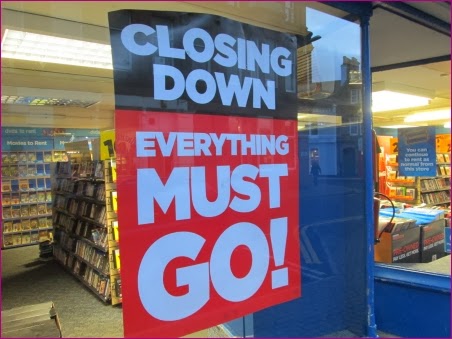 The scene in Leopold Street just now. Similar posters have prompted comment on news sites elsewhere. In Barnstaple for example a news article contains the following comment:  "However, a head office spokesman today said she couldn’t be certain the store was closing and said the company  “remained hopeful” a buyer could be found."
As in Barnstaple, still some hope perhaps but the poster hardly gives an upbeat message.
Posted by Graisg at 12:51 AM

Especially when it's a national chain that pretended the internet didn't exist, much to the joy of LoveFilm and Netflix.