Laughing out loud at Comedy@Nairn

Many Nairn residents are not strangers to the Community Centre as an entertainment venue, the versatility of the building and the efficient, welcoming staff are the foundation of many a great night out. This reputation was further enhanced when the Centre hosted the second Comedy@Nairn session on Saturday night. Inside, the ascending rows of chairs had been assembled facing the single microphone on the stage. There was a semi circle of three rows of individual seats closer to that stage too - as events were to prove seats for the more daring or uninitiated. Occupants in these seats would be probed for material by the comedians that Comedy@Nairn organiser Michael Green had obtained for the second of what he hopes will be a long run of shows. A series that could, perhaps, eventually lead to Nairn having its very own comedy festival.

There were a mix of local and visiting faces in the audience, this became evident when the first of the acts and compère for the night, Billy Kirkwood, came on for the warm up session and explored where people were 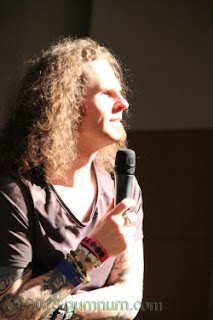 from and what they did for a living. The long haired young man with his bare, heavily tattooed arms engaged the audience with his animated west Central Belt persona. Swear words were de rigueur but nobody seemed offended by that or the heavy use of sexual innuendo. It was 8.45 p.m, not quite the watershed, but most folk had probably had a few drinks already and they were ready and willing to be entertained with more than a sprinkling of profanity. Nairn’s perceived bourgeois existence came in for some exploration as well. Mr Kirkwood obviously is unaware that we have food banks here and, pro rata, probably as many people in tough circumstances as some of the bigger towns and cities in Scotland. But it was comedy; a stereotype taking the piss out of perceived stereotypes?  Come as yourself, or come as a stereotype, it was optional but it was all good fun. He did well and earned a good ration of applause.

Joe Heenan hails from Perth and he was next up. He seamlessly kept the smile on everyone’s faces including a few hints about his cosmopolitan career to date which has included a gig in Oxford – yes, you can imagine the culture clash that was mined for material to fatten up his stint on stage in a place not quite as posh as Oxford, but perhaps a bit 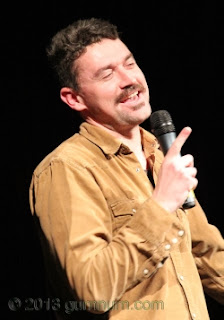 posher than his normal venues. Again a polished entertainer, flawlessly inserting his assessments of members of the audience into an instantly available reservoir of other material he drew upon for the performance. If there was to be any criticism of the show it would be perhaps here, I spoke to others afterwards that thought that maybe Joe was more at home with the more explicit material than the lighter stuff but that is not to say that it was in any way a poor performance – it’s all relative. This observer would give a silver star to Joe, gold for both Billy Kirkwood and the third man up, Raymond Mearns.

Raymond maybe edged it too ahead of Billy, if I had to put a 1, 2, 3 order of preference on it. It might have been that he had done a bit more research or was just a little more daring: his impressions of the hospitality provided before the show by Michael Green for example; The Nairn (sic) Telegraph, a scathing ridicule of Findhorn and a continuing plethora of targets for his comic ire. There was more sexual stuff too, plenty of that from all three really but “we are all adults aren’t we?”  Yes, we were and it is after all, no worse or any less obscene than the material that can often be heard in many thousands of workplaces on a regular basis. It’s just that in our daily lives comedy only intrudes for brief intervals at tea breaks, or for the posher folk, water cooler moments. At 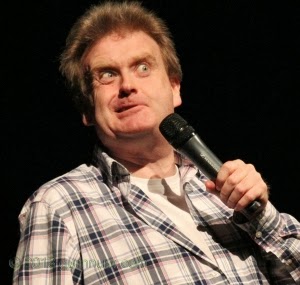 Comedy@Nairn you have an onslaught of comedy, the full Saturday night blitz from a central belt troupe of jokesmiths. Nairn isn’t really as posh as you think it is guys but I suspect you really know that anyway :-)

Too quickly, a couple of hours had passed and a steady stream of the 200 or so cheerful people were making their way down the steps in front of the community centre to continue their night out with some of the special offers that Comedy@Nairn had arranged with local businesses. It all looked and felt good as they contentedly streamed away to continue their Saturday night.

Tips for anyone going to similar events in the future? Well, if you are a dentist and must sit in the front row (two members of that profession chose to do so) just lie and say you’re something else rather than provide the comic masterminds with enough material to reverse the roles and have you at their mercy in the chair. On the job front too, perhaps think twice when asked, about describing your workplace as an “incubation and innovation centre”. No, don’t worry; these guys were fairly gentle really. Good craic, good night, good Comedy@Nairn.

Images from the top, Billy Kirkwood, Joe Heenan, Raymond Mearns - a few more images here.
Posted by Graisg at 2:49 AM

But was it funny?

Being but one of the many Nairn residents who is not a stranger to the Community Centre I can vouch for the fact that the ascending seats can only face one direction, the stage!

No as Green as I'm cabbage looking said...

Is Russell Brand guest editor of the Gurn this week?