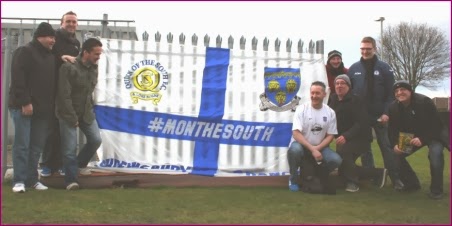 Station Park, once again, proving itself an attractive destination to groundhoppers on tour. In town today were the Shrewsbury branch of the Queen of the South supporters club. They arrived in town off the train to be met by Donald Wilson who took them to the ground where they received a guided tour with club manager Les Fridge. They then headed to another spot popular with local and visiting fans, Uncle Bob's Bar (Wee County Fans Central), where they took some refreshment before returning to Station park to watch Nairn beat Huntly 1-0.
Posted by Graisg at 6:21 PM

And very welcome we were made to feel too, everyone loved our time in Nairn & it's safe to say Nairn County is 'our' Highland league team now.
Thanks for everything

The branch had a fantastic day & were made to feel very welcome. We'd like to extend special thanks to Donald, Les, the ladies at Uncle Bob's & the staff at The Royal British Legion for their kind hospitality.
See you again in the future.

'S e do bheatha! - your're welcome! Great to see you guys at Station Park and glad you enjoyed your visit to Nairn - all the best for the rest of the season. Cheers!