At the recent River CC meeting Simon Noble, chairing for the evening, told his fellow watchdogs:
“...and there may be a way that we can do that and that is to look at, not us taking on all of this kind of works ourselves but setting up a thing called a social enterprise. The committee can be basically a business which takes on these sorts of projects. That involves – to actually get to the point of actually creating a social enterprise which could do that, we actually need to help bring in some money to pay people to write business plans, feasibility studies, write bids for big money so we can employ people who could then run the social enterprise.”

“Would you be able to get some of that money from the Lottery,” asked Liz?

“Well, that is definitely a possibility,” continued Simon. But one of the things that is quite often discouraging about it is that, actually is quite hard to get funds and so on but we have had some very positive indications that we could access funding in the short term. Just enough funding to get someone to do some of the leg work for yuo. Not that we would be doing all that work but we could kind of say this is what we want and 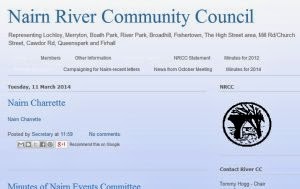 someone goes off does a bit of work and comes back and we say, We don’t want that, we like that and that’s how it should be.” So there are clear indications that we could tap into enough funding to get someone to do that initial work for us.”

Simon said: “I think we would want to develop our own.” He then outlined more of his thinking. “I think what we also need to be thinking about doing is setting up a steering group or a sub-committee if you like, which has got a couple of community councillors on it so that our interests and our views are followed through. So there are a couple of community councillors involved but we have other interested people in Nairn that we invite to join us...”
Posted by Graisg at 11:28 PM