The Alton Burn - A lot goes away with the rubble. 2

“Do you best, and rejoice with those who do better” seems to have been the motto of the school or at least the magazine (two surviving copies of which have kindly been loaned to the Gurn by Mike Ross and form the basis of these articles and extracts). The issues are from Jan of 1932 and 1936 respectively, when many fateful events were unfolding in Europe that would lead to another catastrophic World War only 21 years after the end of the First one. In our present day terms that would be a gap of time between 1993 and the present day.
In 1932-6  events and memories from the first conflict would still be raw and as we suggested in the last article, impacting on the life of those boys at the school.

Across the world the great depression was in swing and it will have affected life in Nairn. Down at the end of the Alton Burn Road though there would have been an institution that would have been perhaps immune to the effects of the world economy as young boys were being educated for, according to the mentions of aulumni, middle-class roles in the world including the military and the empire. There are mentions of former pupils winning blues at Oxford and Cambridge. The Alton Burn School was a fairly new institution itself but it had wasted no time building up its own traditions and had iconic former pupils that new boys could aspire to emulate. This image of the school diary below (click to enlarge) gives a snapshot from September to January 1936. 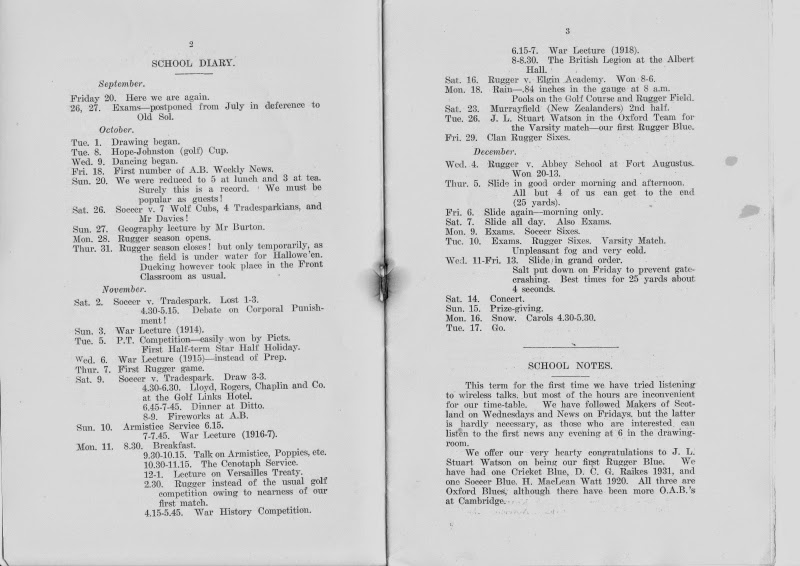 Those events were just over 78 years ago, and any surviving pupils might still be out there somewhere and well into their eighties and nineties.

How much would those boys have come into contact with youngsters of their own age in Nairn and just how much would they have been aware of life in the community beyond the school. We know so much about what life was like in Nairn in those times thanks to the work of Alan Barron and others but this observer finds it fascinating to wonder what the Alton Burn Schoolboys, a privileged elite perhaps, would have made of what they managed to see of Nairn. Obviously they would have led a disciplined existence and might have had very little contact at all over and above the sporting dimension but one might imagine them being allowed to the shops on specific occasions to buy the essentials of maintaining contact with family in the UK or abroad - birthday cards, presents, writing materials? Maybe that was done under strict supervision too but intelligent young minds would have seen and heard much on such expeditions.

There were football matches against Millbank, Tradespark and the Nairn Wolf Clubs, it is hard to work out if these matches were home or away games. If they were played on the “field” at the Alton Burn then were the locals given the benefit of some hospitality afterwards in the school. One can only imagine that the Millbank footballers were over the moon with their 6-0 win over the Alton Burn. Did they consider it a massive victory over “Toffs” or did the community then have a more relaxed attitude to the school in terms of a social divide? The school would after all, have placed regular orders with local businesses and tradesmen would have been needed for all the regular maintenance associated with the building. A football matches between a private school and local teams that have long gone and played against a backdrop that has just vanished too. Maybe the game against Tradespark was played up in that area, maybe Ben Wyvis in the background with a winter toppping of snow. Think for a second or two and you can just about bring such a fixture back to life in the windows of your mind. Events just a few years ahead of those fixtures would have got up with the loons of both social spheres, maybe some of the Alton Burn boys might have later been officers in regiments their football opponents served in.

It is very easy to assume a lot but history, even local history, isn’t always what we might imagine it to be. There is a lot we don’t know, maybe the masters and boys of the Alton Burn involved themselves with the community in ways that the 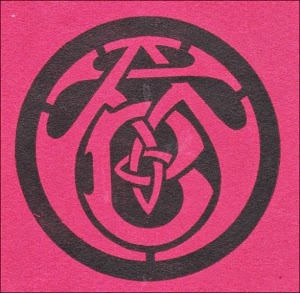 two magazines simply don’t record. Even in this age of websites, facebook, instangram and other social media etc, there are some everyday things that might be forgotten. One wonders if historians in the future might wonder what life in our time was really like simply because there will be so much information (unless the digital clouds all fall in on us) and it will be hard to make any conclusions simply because of that. Perhaps academics of the future will ask of our time - were they all really obsessed with videos of cats doing funny things? Maybe somethings are better left to the imagination - and with a bit of imagination why not try and visualize the following from November the 9th 1935:

Mr Henderson, who had invited us so kindly to the Golf Links Hotel, came and fetched us at 4 p.m. We Were brought to the hotel in three loads and went into the lounge where we were to see films. When everyone was seated the light was switched off and Mr Henderson started by showing us a funny film of Harold Lloyd. It was very funny, but even funnier were the next two films of Will Rogers and Charlie Chaplin. Will Rogers drove a Ford Car with such vigour that it fell to bits at the end of his journey. Charlie Chaplin’s film was also very funny. It was taken in a theatre and each time an actor appeared on the stage some disaster happened to him.

When the funny films were finished, Mr Henderson showed us the Alton Burn Sports. We saw the sprints, jumps, relay, and prize-giving. After the sports we saw the Fathers’ Match. After this there were films of the Duck of Kent’s wedding, the launch of the Queen Mary, and the Jubilee Naval Review. As there was still some spare time Mr Henderson showed us pictures he had taken during a cruise on the west coast. These were taken from his motor yacht the Jester. We saw marvellous coloured views of Gairloch, the most Northern point he reached, and other views of Skye, (where Seton Gordon lives) Kyle Rhea, Loch Hourn, Mallaig and the Crinan Canal, through which the Jester passed. When the film was finished we went into the dining room and there enjoyed a five-course dinner (6.45-7.45). At 8 p.m. we were back at the school crowding at the study and front class-room windows to see Mr Henderson’s firework display which went on till 9 o’clock. There was a great variety of fire-works, rockets of all kinds, Roman Candles, Catherine Wheels, Humming Spiders, and Jack-in-the-Boxes

Soon after 9 we had three cheers for Mr Henderson for such a splendid evening, which will long be remembered as one of our best days.  "
Posted by Graisg at 8:35 AM

According to this Youtube story the school closed as a result of a tragedy involving the drowning of a pupil, at the school in the thirties, in the Golf View quarry.