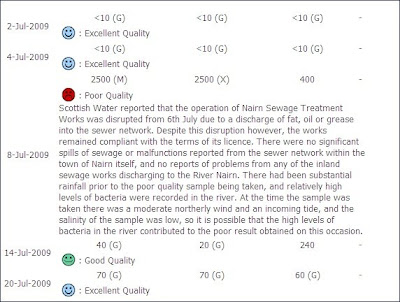 A poor quality result for the period that coincided with oil finding its way down the drains. Sepa seem to think this test was once again the result of water quality from the river impacting on the situation. But it is a coincidence that it coincided with the offence alledgedly committed by youths?
The details appeared in the press:
' A large quantity of used cooking oil was poured into the Nairn drainage system in early July, smothering the treatment works and disrupting the organic process used to digest sewage and disperse clean water in the Moray Firth. Only due to the quick thinking of Scottish Water staff was a serious pollution event prevented. '
The full press release is available on the Highland Council site here. The Numpties that put the oil down the drains, whoever they were, are not only putting the physical health of the community in danger by affecting the smooth running of the sewerage works but also affecting the economic health of the community by risking the reputation of Nairn's beaches.
Having said that we can't ignore the state of the river however and yesterday the Gurn received a complaint of a strong sewerage smell at the foot of the west pier, a picture accompanied the complaint. 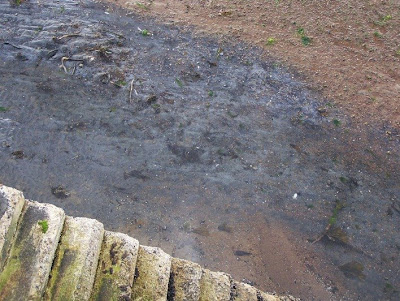 Smell and appearance don't mean it is sewerage contamination, there could be other reasons but keep an eye on this area gurnites and what's coming down the river in general. Remember how things were earlier in July even with no heavy rainfall.

Numpties we can prehaps deal with but the river situation will take a lot more investment and thought.

Email ThisBlogThis!Share to TwitterShare to FacebookShare to Pinterest
Labels: sewage

Smell and Appearance? Shite is shite wherever it lands.All the other goodies are worth a closer look too.Don't believe all you read in the papers,definately not a large lump of convenient fat this one.

So it's all oil under the bridge then?