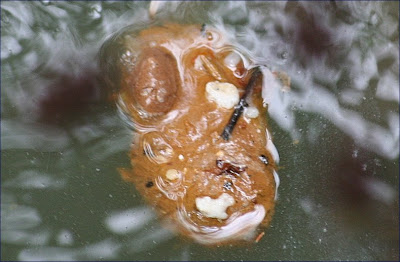 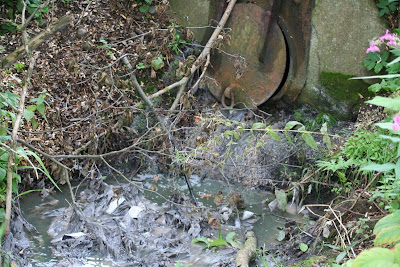 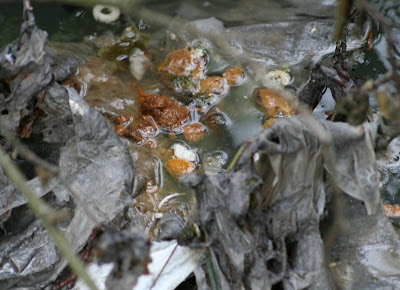 No doubt about it, this time the real McCoy can be seen flowing into the River Nairn from an outfall just 20 yards above the sewerage bridge on the left bank. The stench on the riverbank is overpowering. The Gurnmeister had seen a grey streak close to the bank just before 10.00 a.m. this morning but was in too much of a hurry to investigate. Around 17.00 and armed with a camera he returned to find the following scene. Ducks were in the water around the outfall, the wildlife has no choice but what would bathers on the beach do if they knew what was coming their way?
More pictures of how this health hazard is entering the river are available here on the Gurn's flickr account.
Plus more background to this story on the Swan Blog. It seems SEPA have been informed, will the environmental authority act quickly?
UPDATE:
We've had something in from a gurnite who's seen a bit of the real McCoy in the past and is now subscribing to the school of thought that thinks a few jobbies could be getting into the harbour on their way down to the sea. There's a couple of pictures here.
UPDATE: news of Scottish Water in the area late this evening and one of the usual explanations? Get over to the swan blog for more information.
Posted by Graisg at 4:21 PM

These pictures are pure shite
by the way!!!

That has been running for years,but
nobody bothers to listen.The Harbour even turned brown today.

Come to Nairn! you must be joking.

I remember as a child 30 odd years ago often swimming of the east beach...
The jaws movie theme would come into my head as i swan, when all of a sudden this long thing surfaced near me on many an ocassion... no silly it was not Jaws it was a Nairnite shite! hahaha
Neil

A tale of a pre tertiary treatment dip for sure :-)

what you would call a crap day. joking aside they need too get too the bottom of the problem. looks like a lot a of bottoms. pardon the pun this leads on too the problem can our sewerage system cope ? is it because their is an increase of folk in the town at this time of the year. and again what will happen if they build at sandown and all the other plans that have come forward.

When the sewage works were upgraded we were assured that they would cope with the potential increase in population. This may be the case but is what we are seeing now exposing that while the sewage works can cope, the pipes and drains leading to it cannot?

Do jobbies (like dogs) resemble their owners? If they do, I think I recognise one of them!

would it be Jobbie Williams
his song are Crap

Spelding! you have hit the proverbial nail on the head.Its a pity the same people who are supposed to know these things,would
stop Bullshitting,and get things sorted.

I can remember the son of a hotelier diving in the harbour and swallowing a lump, sympathy all round - not ;o)