A mishap on the pontoons (as predicted) 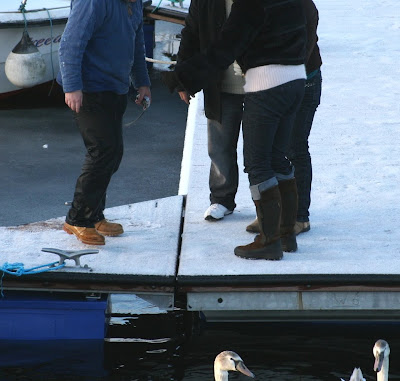 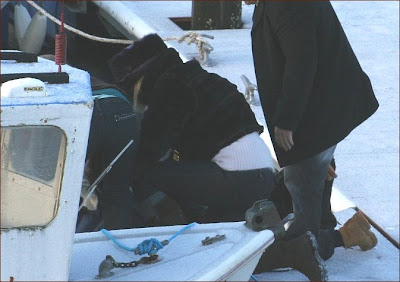 Pictures will enlarge - you can see the drips on the guy on the left. The first photograph shows a gentleman, dripping wet up to the waist, who had just moved to get a better vantage point to observe the swans from another part of the pontoon and then had fallen into the water. The ice actually broke his fall and saved him from complete immersion and his three companions were on hand to pull him out. The mishap over, he retreated to a nearby vehicle and a quick change of clothing.

At the last ward forum meeting Graham Vine and Tommy Hogg had called for gates to be installed on the pontoons as a matter of urgency. Sandy Park told the meeting that he had the matter in hand. Better move fast Sandy. The guy in the picture got off with a bit of a fright and there were folk on hand to help. What if it had been a lone child with no one nearby? It doesn't look as though it would be easy to pull oneself out. Action please before there is a serious accident!

I would'nt risk observing or feeding the swans from the pontoons in this freezing weather.

Nor would I venture too close to the edges of the harbour basin or piers - as they have no safety barriers to prevent accidents.

But then I take responsibility for my actions and prefer not to put myself at risk as a consequence of my actions.

My sympathy to this person, but it was his actions that caused his plight, I dont see why my contributions to council tax should be spent on gates to a pontoon that only benefit boat owners, let the sailing club and boat owners foot the bill...!

The boat owners are paying for the use of the pontoons. All that is asked is that some common sense is applied and that steps are taken to limit access , particularly to those who may not fully grasp just how dangerous the harbour can be.

The harbour users are obviously causing offence to you by asking for this relatively simple measure to be taken.I sincerely hope that they don't find themselves in the situation of having to say "We told you so" at some point in the future.

Strange, in that we live in a world seemingly cursed by needless safety restrictions, yet, given a situation where the need for a public safety measure is glaringly obvious, nothing happens.

You may take responsibility for your actions, and the man that fell in yesterday should have known better but I doubt very much if many of kids that are attracted to the harbour would have the same philosophy.

I like to think of the "protective" measure as being protective of being sued.

a story in todays P J along the lines of this. page 3 health and safety reasons worth a read. as i have come across this in other areas of working practice's we were down at the harbour just the other day and this was the first time i had seen them. lets hope common sense is used on this and it is dealt with the up most haste.

There are very few barriers or gates round the harbour basin and piers.

few people if any fall in..! and as you say "particularly to those who may not fully grasp just how dangerous the harbour can be".


so what is the difference here..?

peoples choices to put themselves at risk of falling in!!!

The harbour users cause no offense whatsoever to anyone, but should they wish to use the pontoons exclusivly and exclude the public from use then footing the bill to secure the entry should not be a problem.

people quite often used the ladders to access the pontoons previously and I am not talking about the boat users.

It's easy to criticise the designers, they hold responsibility for any failures why not just leave it at that.

What has been clearly highlighted by this unfortunate slip into the harbour is just how easy the new ramps make it to get onto the pontoons; prior access was by a vertical steel ladder that not many other than boat owners braved.
The call for gates to be put in place is for very good reason. Had the person who fell off the pontoons been on his own we could have seen the unfortunate person drown, clearly the current signs at the top of the ramps and not sufficient as a deterrent. Health and safety is obviously an issue and the hope might be that this incident might make the admittedly cash strapped council dip into the near empty coffers. Sadly it seems that the latest suggestion being put forward is for a removable chain to be put in place on the ramps. Just how this might work remains to be seen but it hardly seems a well thought out response, just what will it take for proper gates to be put in place?
Nairn harbour has been a leisure rather than a commercial operation for many years, and in that time all boat owners (not just members of the sailing club) have paid a considerable sum for what in effect is parking!
Sadly with the death of Alex Taylor we have lost our harbour master with very little chance of him being replaced due to the current financial constraints being put in place by our council, the loss of a harbour master also means that the ramps pose an even greater safety hazard.
Whilst the CCTV may be pointed towards the harbour more often than before? it would be very hard if not impossible for a camera operator to spot someone in the harbour at night and maybe not even in the daytime.
I appreciate the lack of available monies to our council but would ask that they consider the installation of gates with up most urgency. We certainly do not want a ‘told you so’ situation to happen