Inquiry gets under way with a million pound question! 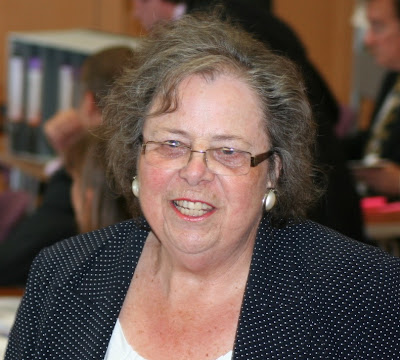 Nairn River Community Council's Jeanne Tolmie arrives at the inquiry this morning. Picture will enlarge and more here.
So before the first witness could be called there was an intervention by the applicant's QC, he wanted to draw the Reporter's attention to a sequence of events that could have a serious impact on the inquiry.
Initially it seems that Highland Council hoped to get serious monies out of Sainsbury's under the A96 Framework Protocol (i.e. the principal that developers help finance infrastructure). Well earlier in the year the applicant's representatives were told in a meeting with Highland Council officials that they wouldn't have to pay this protocol. With that you could knock a figure in excess of £1,000,000 off the total cost of the project. Last Friday afternoon they were told that they would have to pay! Last Friday afternoon Gurnites!! Now understandably most people would be pissed off with that especially when precognitions to the inquiry may have been geared for non payment of protocol dosh. So the reporter wants to know what the position of Highland Council really is. The council's solicitor present at the Inquiry told the Reporter that she had missed an e-mail (dated 12 May) telling her that the position had changed again. The situation still remained confused however. Someone is hotfooting it through from Glenurquart Road and should be there for the afternoon session starting at 13.45 p.m.
Incidentally the QC seemed to have a pretty good argument as to why Sainsbury's shouldn't have to pay the protocol and wanted to know why it hadn't been applied to the Somerfield planning proposal. The inquiry runs until Friday and then again for two days next week . Worth a peek.
A P&J reporter was present this morning, it will be worth seeing their take on the situation in tomorrow's paper.
Posted by Graisg at 11:50 AM

Email ThisBlogThis!Share to TwitterShare to FacebookShare to Pinterest
Labels: Sainsbury's

The crowd of mafioso types in the dark suits all look terribly sinister to me, like they're auditioning for Reservoir Dogs 2. Are you able to caption the photos to put names to the faces, or will I just have to give them my own handles based on their appearance and dress - Mr Blue, Mr Beard, Mr Grey, Mr Specs etc