Keeping the beaches clean with Liz and Scottish Water 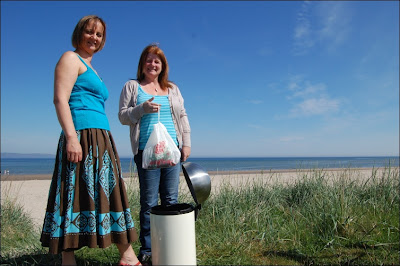 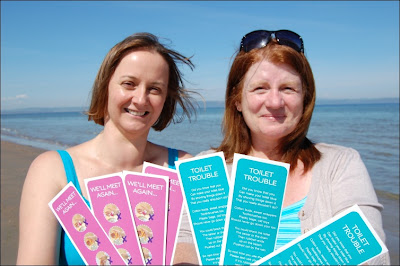 They certainly got a good day to launch their 'BAG IT AND BIN IT' campaign that's for sure, you only have to read the last two Gurn articles to see that. If Liz was down the beach today maybe she might have noticed some of the rubbish that made its way into the harbour. However, this initiative is about what goes down the cludgie not what gets left at bins that are already full but the irony of Liz standing next to a bin on the beach will not be lost on most Gurnites.
Here's the campaign information:
'BAG IT AND BIN IT' APPEAL TO HELP HIGHLAND BEACHES
A summer-long campaign was launched today (1 June) to encourage Highlanders and holidaymakers heading for the region's beaches to make the most of the predicted,warm, dry summer by bagging and binning bathroom rubbish rather than trying to flush it away.
1 June marks the start of the official 'bathing season', when formal sampling of coastal waters begins, with results posted online and at beachside notice-boards by environment agency SEPA. In the run-up to the season Scottish Water inspects any waste water assets it has in the vicinity of official bathing beaches to double-check they are operating effectively.
Despite the increased vigilance, Scottish Water still faces a major issue due to the large amount of inappropriate items flushed down toilets, causing blockages and potential spillages which could affect popular beaches.
FROM BABY WIPES TO TRAFFIC CONES - WHAT PEOPLE FLUSH
Some of the more unusual items that have been found to cause sewer chokes in Highland include traffic cones, woolly jumpers and underwear. One of the main culprits is baby wipes. These tough, moist tissues do not break down like normal toilet paper and easily cause blockages.
Joanna Peebles, Scottish Water's communities manager for the Highlands, said: "Scottish Water is proud to play its part in protecting the wonderful beaches of the Highlands by treating waste water to modern standards. The general public can help by bagging and binning bathroom rubbish rather than trying to flush it away. We regularly have to unblock sewers, pumping stations and treatment works because people have flushed inappropriate items down the toilet. To those who're already bagging and binning such items we'd like to say thank you."
Andy Rosie, Head of SEPA's North area, added: "SEPA welcomes this initiative in the north of Scotland. During the bathing water season, SEPA has discovered evidence of waters failing to meet regulatory standards due to blockages in the sewer system, caused by people disposing of bulky items inappropriately. While a sewer can be unblocked fairly quickly, even a short-term failure of the bathing water standards may influence the public's choice of holiday destination, which can impact on local communities reliant on tourist-generated income. SEPA would like to encourage local people and holiday visitors to do their bit for the environment by bagging and binning their bathroom rubbish."
Also backing the campaign is Councillor Liz Macdonald, Provost of Nairn. She said: "Nairn beach and sea front is one of our most precious assets and it's important everyone takes responsibility to keep them clean and dispose of items appropriately so the wildlife and environment are protected and safe from pollution. Let's hope we have a great summer and we can all enjoy this fantastic resource." Another supporter of the Bag It & Bin It campaign is Ruaraidh Taylor, proprietor of The Links Tearoom, a popular seaside business in Nairn. He said: "Being located next to the beach, it is important to us for people to be attracted to the seaside, and therefore it is essential that they can enjoy a clean healthy environment to play on the beaches and bathe in the clean waters of the Moray Firth. It is thanks to the efforts of Scottish Water that these waters have achieved such a high standard of cleanliness."
Posted by Graisg at 2:48 PM

Bring your own bin to the beach lol would never have thought of that
Bins are going to be on overtime with everything we have to put in them
Will we get toilet item recycle bins next?
Unless the harbour and beach bin situation is sorted is there any point in the bag and bin it campaign with all the rubbish blowing away and into the river and the sea
This has to be a bit joined up I think or it won't work

Must be near an election?Spin is the word.
Traffic Cone down the Pan.Impossible!.Yet some people will believe anything.

Look, not being funny, but what the hell is it that this bloody anonymouse has going on? How many mice are there for christ's sake? And why do you keep talking to yourself? Please explain, or I am unlikely to sleep easy, less I know. On second thoughts, I think he is talking to himself. Takes all sorts, I suppose..? Keep puffin the spliff, matey! Not that you need any encouragement.

Whats with the bin in the first pic? Aint seen them down the harbour.

Whya re these people all being so "I am your friend"? Oh yes the local elections on Thursday. Cant wait to see the Nairny!!

It's just the euro elections in Scotland on Thursday. You'll have to wait quite a bit longer before you get a chance not to vote for Sandy :-)