In town and tweeting

Appearing at the Nairn Book and Arts Festival tomorrow but appearing today on twitter is Andrew O' Hagan. You can see if he makes any more observations about Nairn on his twitter page. 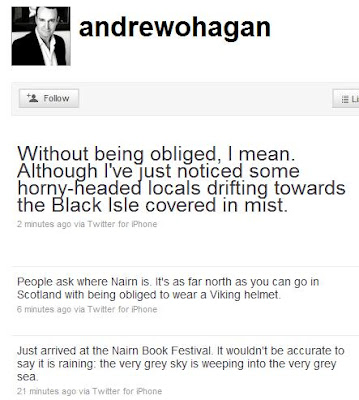 where the sun don't shine said...

If he keeps up twitting comments like these about Nairn and Nairnites I know exactly where I'll be shoving my Viking helmet!

Glad I haven't paid to go and see him

All this 'instant' communication can be a very mixed blessing

Perhaps he feels obliged to say something to his 'followers'. It's a bit enigmatic but perhaps he's staying at the Newton and has seen the coos in field?

home on the range rover said...

Or perhaps he's staying at The Star and has seen the coos and the cooboys?

Nairn is like so big I'd thought I'd mention it twice

Did I tell you about Nairn

Do twats gets paid for this kind of twit stuff then?

After reading the comments made by
Andrew Ohagan on his Twitter Site
regarding his visit to Nairn as part of The Book & Arts Festival i think the event organisers should cancel his fee or if it has already been paid ask for the
monies to be returned to teach the
pompous Mr Ohagan a lesson, me thinks he is like a coo with diarrhoea, full o shite.

Pompous? Perhaps just trying to be artistic. One might have to pay £6 to really make your mind up about him.

Would any of The Gurnites who attended the talk held by Andrew Ohagen notice if any of the audience wore Viking helmets the traditional headgear of the town plus was your £6 well spent? a prompt reply would be very much appreciated as I have to get back in touch with Historic Scotland
to inform them that some facts about the towns history is factually wrong

Yes,they say those Vikings were a right bunch of Basquers.

I think he deserves a trip on a yacht with a second-hand car salesman. Far, far out to sea.... Show him a dolphin, or three. Concrete slippers included.