A new sign has appeared on the Western approach to Nairn on the A96 and presumably there will be one on the other side of town too. It must have been put there by Bear Scotland, presumably with Scottish Government guidance 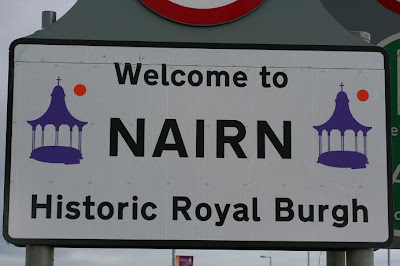 The sign seems to have made good use of the Book and Arts festival logo and seems very appropriate, highlighting the distinctive heritage of the town and perhaps reflecting ambitions for the future. Far better to be an 'Historic Burgh' rather than Ward 19 of Highland Council. The Gurn welcomes this sign which will go a long way to demonstrating Nairn's separate identity apart from Inverness.
If you feel Nairn should have more say in it's own affairs and that the Burgh should assert itself and its distinctive identity and traditions more then you can act with a simple e-mail. If enough people respond to a current community council boundary review organised by the Scottish Government then we can once again have a democratically elected body representing the town meeting in the Courthouse - yes we still will have four Highland Councillors but recent events have proved more than ever before that the interests of Highland Council do not always happily coincide with the wishes of the people of Nairn. We need more say in our own affairs. Nairn is a caring community and a great place to live, let's keep it that way and decide our own future.
Please send that e-mail to ccreview@highland.gov.uk Further details at the top of the sidebar of the Gurn.
Posted by Graisg at 5:43 PM

Email ThisBlogThis!Share to TwitterShare to FacebookShare to Pinterest
Labels: A96

Yes, but it does also look a lot like that well-beloved kiddies TV show: 'In the Night Garden', or perhaps in this case: The Beer Garden? There is a distinct similarity. Marked, in fact, so it is.

not seen any on the other side of the town. or are they trying too save some cash? sign of the times perhaps.