A great, one-off opportunity to see these great servants to the club roll back the
years and run out at Station Park in the yellow jersey one more time on what is sure to be a special night. 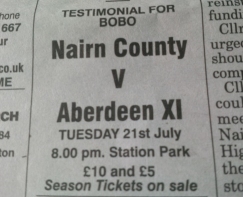 Tickets cost £10 for adults and £5 for concessions. A cash gate will be open at Station Park on the night but please buy in advance where possible to ease congestion at the turnstiles.

Fantastic value and a wonderful opportunity to pay tribute to Bobo's magnificent service to the club over the years as well as seeing a strong Aberdeen team in action as Nairn County finalise their preparations for the 2015/16 Highland League season, which gets underway just four days later."

More details about this match here.
Posted by Graisg at 7:09 AM