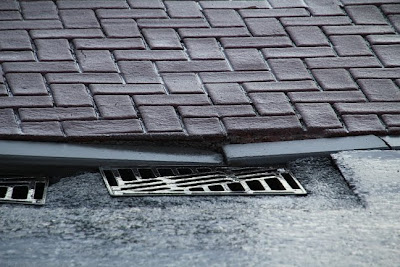 ...what about the roundabout? It looks as though the outer edge of the roundabout on the Industrial Estate side of the A96 on the easter approach to the town is giving way again. It doesn't look so bad as it was last time (yet) but take care up there. Worries about this roundabout were recently aired on the front page of the Nairnshire Telegraph. Now one of our regular readers Dave W writes to the Gurn:
"The roundabout is suffering the same problem as it did a few weeks ago with the kerb stones around the drain on the Balmakeith side have collapsed again.
Also a kerb stone on the Sainsbury’s side is also broken.
A roundabout that is too small for the heavy traffic that has to drive over the kerbing as there is nowhere else to go. Either a full size roundabout with a FULL 2 lane approach on both sides on the A96 or, dare I say it, traffic lights would be a better solution. The current “economy size” roundabout for such a high volume of traffic with its narrow approaches is not particularly dangerous but near misses happen everyday !
I go through this roundabout 4 times a day and approx.. 25% of the time cars are positioned incorrectly on the approaches and the arrows on the ground are totally ignored. The car drivers are being lazy as the “path of least resistance” is easier and the van and lorry drivers have no choice but to straddle the so called 2 “lanes” as it’s too narrow.
I’m sure I’ll never see a Nairn by-pass in my lifetime but one can only hope the design and build quality is better than the Sainsbury’s roundabout! "
Posted by Graisg at 6:50 PM

Email ThisBlogThis!Share to TwitterShare to FacebookShare to Pinterest
Labels: A96

The Sainsbury's car park suffers from poor drainage in one or two areas as well, time to call the contractors back in for some repair work?

As someone who has worked in traffic management my idea would be to decrease the size of the roundabout & widen the road just that little bit as so the traffic no longer has to drive over the roundabout.

Took a big chunk out of your comment Roadrunner. Don't know enough about the subject to allow such comment about workmanship or quaility of materials etc.

It was probably "traffic management"
that got it all wrong in the first place.By the way,the road gully is in the wrong place.Bad design really.

Craisg I fully understand your predicament & you have to be careful what is published on your blog & I respect your wishes but its just so annoying to witness what should have been done right in the first place, its certainly No Magic Roundabout.

It would help if people could learn to read the signs on the road. It is true that far too many can't cope with lane discipline on that roundabout. Perhaps if people were to follow the rule of the road people wouldn't have to veer into the roundabout to avoid collisions caused by those not paying attention.

Even after reading the signs as you approach the roundabout heading in the Forres direction its hellish scary if a delivery lorry is turning right to Sainsburys with the driver who may not wish to mount the roundabout has no choice due to the very tight space but to go into the middle of the road which can cause alarm to fellow motorists in the other lane, i have witnessed this many a time on my daily walk with the dog, but sometimes its handy if a motorist is constipated just drive on the left hand lane and if a HGV vehicle is alongside side you on the right, you will s--t yourself, so instant relief guaranteed. PS Sainsburys have a special deal on toilet paper at the moment.

This morning on my way to work I was behind an articulated lorry, they really don't have any alternative but to cross the slightly raised part. The trucks rear trailer wheels looked liked they were 'churning' the part where the drains are.

Get a life people ! It's a fault on a road which no doubt will be repaired in time. Look around at what is heppening in the world.

Gurning is what we are on this site to do!!