The Scottish Government's infrastructure plan - so when do we see a by-pass? 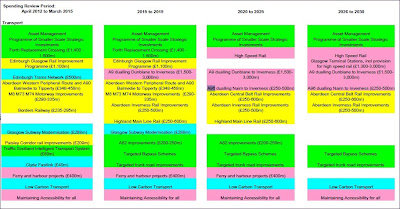 Click on the above image to enlarge and you get a good idea of when this plan would see the money spent. It's page 107 of the document which can be read in its entirety here. There would have to be continuous SNP governments all the way to 2030 perhaps to implement it but who knows - maybe that is just possible? It is interesting to see the investment also planned for the Inverness-Aberdeen railway. Browsing this document it looks like money for the work on dualling the A96 will be there from 2020 but we could get our by-pass a lot sooner than that under "Targeted by-pass schemes"?
However reading some text from page 44 of the document you could be forgiven for thinking that dualling the A96 will not get under way until the A9 has been sorted:
"In addition to the bypasses identified within STPR to deal with particular congestion or environmental issues, including Nairn and Maybole, a number of smaller schemes will be taken forward. Securing the consents necessary to allow the upgrading of the A9 between Perth and Inverness to dual carriageway standard by 2025 is a major programme in itself. Following this with the upgrading to dual carriageway of the A96 between Inverness and Aberdeen will provide a long term pipeline for design and construction skills securing many jobs in our vital construction sector"
A word of caution perhaps from the BBC's Brian Taylor from their report on these proposals : "If a week is a long time in politics, then anything beyond the next election is unfeasibly remote - and the sundry dates scattered throughout this document seem temporally intergalactic.”
Worth reading too is the Nairnshire Telegraph this week, if you haven't already, there is a front page article concerning the prospects for the by-pass and also an editorial in the same vein.
Posted by Graisg at 4:20 PM

Not much detail here just something on page119

It would be foolish for the dualling of the A96 between Inverness and Nairn to be planned separately, or ahead of, the construction of a Nairn bypass. So we have to hope that Nairn is targeted for a bypass sooner than 2020.

Developers and Invernessians will however press for the A96 dualling (because of Tornagrain and the airport) and won't care about what happens in and beyond Nairn.

The Nairn bypass must come first.

The worst of all outcomes would be a dualled A96 as far as Nairn, and no bypass. Nairn would have the mother and father of all traffic jams, permanently, and the Cawdor-Auldearn road would become seriously dangerous if not impossible.

" Nairn would have the mother and father of all traffic jams, permanently, and the Cawdor-Auldearn road would become seriously dangerous if not impossible"

Just highlights the need to have alternatives to a new road system. No matter how you plan it the dual carriageway has to end somewhere and hence mother and father of all jams

Irrespective of what flavour Government is in Holyrood and the desirability of a Nairn by-pass, where is the money coming from to pay for all this? Reads like a wish list of projects and dates randomly scattered beyond even a soothsayer's planning horizon.

Nice in theory, but wishful thinking, I fear, in this part of the country.

A few fewer commas would lessen the need for excessive pedantry.