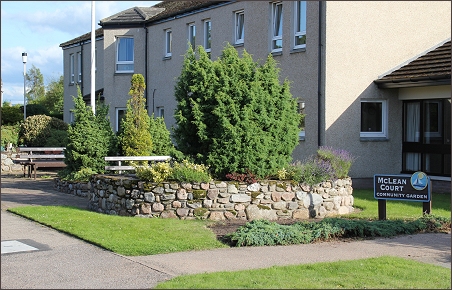 ”When a Nairnshire reporter visited last Friday it appeared that grassed areas had been cut. However planters full of shrubs showed signs of neglect and paved areas were infested with weeds.”

The Gurn has since spoken to an unreliable source close to prominent members of West Community Council who told the Gurn that the Westies had been so exasperated by the neglect of that they had instructed a professional gardener to sort it and had set aside £200 for that purpose. The gardener turned up on the Monday morning to find a hit squad of five council employees hard at work. The west watchdogs are to still contribute £200 however and are consulting the residents as to how the money could be spent improving the garden. Was the Council shamed into action by the Nairnshire asking questions in the background or was it all part of routine maintenance? Perhaps we’ll never know but it seems there have been a lot of complaints raised according to the Nairnshire report.

Gurnites must remember that the number of Council manual workers has been almost halved in recent years, down from 41 to 21 according to one observer so we are now left with a squad that more or less reacts to problems that occur rather than getting there in the first place to prevent those problems occurring.

The Gurn’s solution or attempt at a move in the right direction would be to bring the grass cutting back under council control when the present contract runs out in one year. There still exists in the Council squad a nucleus of employees who have the skills, knowledge and pride in the job to go out look after things if they were given the chance and a little additional manpower. They know where things are and they know what needs to be done. Thus they need the minimum of management – pay a manager off instead of workers? They also would be able to train up new employees (either full or part-time but recruited locally) and install the same esprit de corps that they themselves still possess. There’s still a chance to turn things back a little, perhaps the new regime will have another look at the contract costings and see if we can have a local solution to the problems forced on us by the former centralising administration that was only 16 miles away but so often felt so, so much further from our needs and aspirations.

i went along to help plant up some of this when the the beachgrove garden team did it, a shame its been left this way, and a very good idea to go back to local folk doing the grass and flower beds, as you say they know whats to be done, i would hope they do get back to this way of working it makes sense to me and i am sure a lot more folk would say the same.