More traffic chaos on the A96 through Nairn 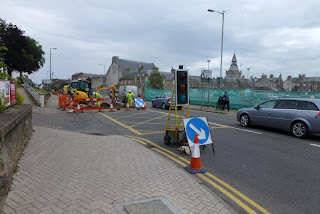 A regular Gurnite reports that he engaged one of the Bear workers working by the Police Station in some polite conversation this morning.  He asked if it was possible to switch off the traffic lights and control everything by manual control thus allowing the traffic to run instead of the delays and hold ups currently being experienced.  He was informed that his suggestion wouldn’t be possible because regulations don’t allow for this and Bear have no one qualified to carry out this function.  Apparently, according to the Bear man, Alba would need to supply someone who is qualified (The Gurn assumes he meant Alba the traffic management solutions company, details of some of the services they provide here).

Our regular makes the following plea “Come on Bear! Switch ALL the lights off from to and let someone with some common sense operate the lights manually. You would be surprised at how tolerant MOST drivers are about letting people out into the main stream of traffic. It can't be any worse than it is now!”

It would seem to be a case of rules is rules and common sense doesn't come into it.  So the chaos continues…….. 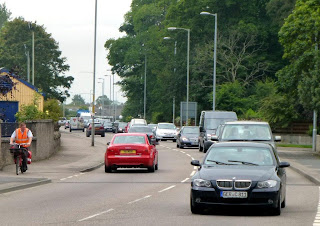 Thanks to Dave Shillabeer for the photos.

Does anyone know what they are doing anyway?

Does anyone know what they are doing to the road?

The key question to the whole problem. Apparently to lay a cable from the lights on the car park side to the Police Station side. But why wasn't this done when the lights were replaced? Did someone forget? This is not the only location apparently. Something for our elected to get their teeth into!

They obviously require a qualified stopologist !

as usual,roads dug up during golf weeks,and,were we not told that no works would be done during said weeks,isnt that why the old community centre eyesore isnt gone yet.
typical crap from council offices
narook

He's right in that Alba will have set up the temporary lights (they have the required qualifications to do so) and presumably none of the BEAR operatives on site have the appropriate qualifications to run them on manual. The issue is the fact that BEAR are not prepared to pay Alba to operate the lights. As for the permanent lights being switched off, that's a different matter entirely.

Sounds like someone who doesn't drive in rush hour periods, when many drivers are happy to block the yellow boxes, junctions, and roundabouts, just to prevent someone else getting in and slowing their journey by a couple of seconds. :)

Do we really have a whole rush hour period in Nairn? Maybe we should all start working flex time to beat the congestion

sunny side up said...

So they switch the lights off. Some folk are never happy

Don't get me going!

Back in the good old days of Nairn Council, we didn't need traffic lights to nanny us through the town. More example of interference from outside Nairn.

No no, we need the lights on or poor old Brian T will never get home