The Gurn has received a press release from Muir Smith Evans, Charles Allenby's advisors. The considerable number of students of all things planning in Nairnshire will be most interested:

Concerns have been expressed following the recent publication of the Highland Council’s draft masterplan for development proposals at Nairn South. This plan is due to be considered by the Council’s Planning and Environment Committee on 16th January.


Muir Smith Evans advise on some of the largest and most complex development projects across Scotland, and are acting on behalf of Charles Allenby, the owner of part of the land encompassed by the masterplan. They are concerned that the proposals fall short of the requirements laid down by the Scottish Government Reporter following the Public Examination in September 2011 which were subsequently enshrined in the recently adopted Highland Wide Local Development Plan.

The key areas of concern include the number of houses proposed in the first phase of development and their density, the lack of consideration of existing landscape features and how the development will fit into the landscape, the phasing of the development and the inappropriate siting of a new foot and cycle bridge connecting the new homes to Nairn Academy, the station and the town centre.

Since this land was originally earmarked for development Mr Allenby has given very clear instructions to his planning team that any proposals should leave a lasting legacy for the town, be based on the capacity of the land to absorb development rather than ownership boundaries, form a natural extension of the town and allow for expansion of the sawmill, an important local employer.

The meeting of the Planning and Environment Committee on 16th January is a critical point in the planning process for Nairn South. “The masterplan will govern the future of this sensitive area to the south of the town. It is vital that we get it right and that the Scottish Government Reporter’s findings as well as government advice on fitting new developments into the countryside are fully embedded in the masterplan.”

Muir Smith Evans also enclosed a briefing note with the press release. It may be far too esoteric for some but again there are many serious students of these matters locally who will easily digest the material. Click the read more tab below to read the briefing details.
Nairn South Masterplan


The Highland Council Planning and Environment Committee is due to consider a Draft Masterplan for Nairn South prepared by planning officers on 16th January 2013. The masterplan is a requirement of the Highland Wide Local Development Plan that was considered by Scottish Government Reporters last year.

Policy 18 of the Highland Wide Local Development Plan advises that the masterplan should:

 Provide for a mixed use development of an initial phase limited to 250 homes, community uses, local/neighbourhood retail facilities and business and commercial uses;
 Set out contributions to infrastructure improvements required including a pedestrian & cycle bridge over the railway;
 Establish a requirement for 25% affordable housing as part of all developments within Nairn South;
 Provide for potential expansion of the sawmill; and,
 Provide a strong landscape framework within which development can take place.

Mr Allenby owns part of the land in Nairn South around Balblair Road and has appointed and experienced team of, architects, masterplanners and specialist environmental and technical consultants to advise him. He wishes to leave a lasting legacy for the town and not simply to maximise returns from over development at inappropriate densities.

He considers that the housing numbers shown in Phase 1a) and Phase 1b) of the Nairn South Masterplan should be limited to 250 units but the draft Masterplan shows a total of 320 units and would lead to higher density development that would be out of character with the edge of town location of Nairn South. Such densities have previously been found to be unacceptable to Highland Council at Sandown and Delnies in Nairn. 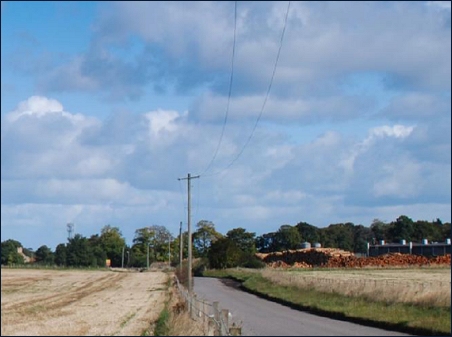 Scottish Government advice in PAN 44 establishes the need for proper assessment of landscape capacity and acknowledges the importance of understanding context and how many development plans and development proposals are often inadequate.

PAN 44 Fitting New Housing Development into the Landscape states that “Lack of integration with the landscape is particularly noticeable on the edges of our small and medium sized towns. Many new housing developments have been planned and carried out without evident regard to existing urban form and the local landscape, or to their wider visual impact particularly when seen from road and rail approaches. Insensitive development can undermine the special environmental quality of towns and their setting in the countryside which have drawn people to live and invest in them in the first place” and “Development should respect landform and landscape”.

In particular regard to the planned release of large housing allocations in structure and local plans PAN 44 states that these “should be guided by a better understanding of the characteristics of the landscape and its suitability for development. Where appropriate, plans should show any specific design requirements which follow from this”. …and “Careful attention to landscape fit should be given by housing developers, and the principles of good design should be applied consistently by authorities in their planning decisions”.

As part of the masterplanning exercise it is essential for a planning authority to very carefully consider where boundaries are drawn, be informed by government guidance and advice, and to explain and justify them.
However, the Draft Nairn South Masterplan appears to contain no assessment of landscape features, character or capacity. The boundaries shown and lines drawn are not informed by the topography or landscape features and do not consider the capacity of the landscape to absorb development.
The phasing in the Draft Masterplan is also inconsistent in that it promotes development further from the town centre in earlier phases than development that would form a natural link to the town.

Mr Allenby believes that the Draft Masterplan prepared by Highland Council (shown below) should be amended to change Phase 2a) and Phase 2b) to show a more logical progression of development from the edge of the town out. 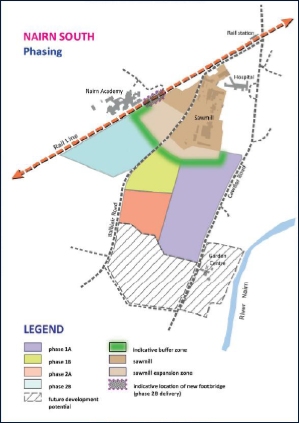 The initial concept masterplan prepared by Mr Allenby’s team is illustrated for comparison below. This is consistent with the key themes of the Highland Council Masterplan but provides for a better transition between residential areas and commercial uses and particularly provides for a better route and crossing of the railway. 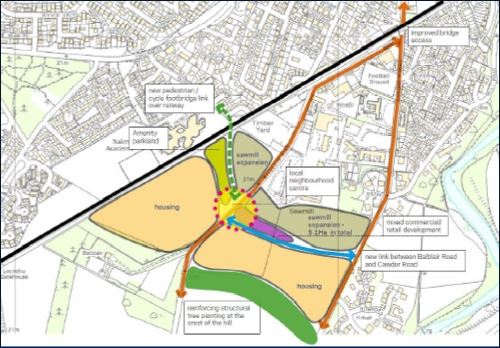 The Highland Council Masterplan restricts the crossing of the railway and shoehorns it into a channel or alleyway between the existing railway boundary and an extended sawmill storage yard. Such an alleyway would not provide for a safe or pleasant pedestrian route. A re-alignment of the crossing point and the land required for the sawmill expansion is therefore required. This would provide for a safer and better designed crossing of the railway and allow expansion of the sawmill.

The reporter from the HWLDP agreed with this approach and concluded (paragraph 91) regarding the proposed footbridge over the railway, “there appears no reason why the approach ramp from Nairn South could not be adjacent to the south-east boundary of the railway line, opposite the Academy. An approach ramp in this position would occupy a small part of the existing sawmill expansion area, would leave most of the expansion area unaffected and would appear to have no adverse effect on future sawmill use of a rail siding.”

Mr Allenby’s approach has always been centred upon the need for a comprehensive masterplan for Nairn South. Following the publication of the Reporter’s findings and the adoption of the HWLDP his team have further revisited their own concept masterplan (shown above) and are due to submit a comprehensive application for Planning Permission in Principle to Highland Council within the next few weeks.

This will provide for a mixed use development, community facilities and open space, a pedestrian and cycle bridge link over the railway, local access improvements as well as expansion land for Gordon’s Sawmill and limit the first phase of development to 250 homes including 25% Affordable provision. All of this will sit within the landform and landscape features and setting to provide a logical and contained edge to the settlement.

Off to do some blogging on the PED stuff

When is the South Committee due to make a decision on the Consortium Planning Application for the area? Anyone know? Which of these two developments do you think would be the most likely to deliver? Just a few thoughts.

Forgot to put this in